Medical dictionaries define andropause and climacteric as a stage of life that can occur at the termination of the reproductive period, which is between the ages of 40 and 50.

The standard medical dictionary highlights that this stage is manifested by body changes such as somatic, psychic, and endocrine symptoms. Since menopause in middle-aged women has been defined, there have been different definitions of a similar condition among men. Middle-aged men in their 50s and 60s tend to present with an abrupt loss of overall wellbeing, involving emotional, sexual, and physical disturbances.

The two terms referring to male aging have been used to describe symptoms linked to growing old and menopause in men. These include decreased sexual drive, fatigue, reduced muscle mass and strength, depression, irritability, and anger. It is, however, still unclear whether these symptoms are a result of male menopause or just a part of aging. Male menopause involves a drop in the levels of testosterone, which is often associated with hypogonadism.

Andropause and climacteric are similar when their symptoms are considered. Testosterone is produced in the testes, fueling the sex drive and mental and physical energy. It also regulates the fight or flight response and maintains muscle mass. There are certain conditions that can trigger the early occurrence of climacteric, including surgical removal of the testes and cancer of the testes. Note that erectile dysfunction is mostly caused by psychological or medical occurrences and not conclusively old age.

The clinical entities linked to men’s menopause should be investigated by a physician to rule out pathologic factors such as diabetes, renal and hepatic malfunction, neuropathology, and circulation disturbances, among others that could be easily ignored and classified under the agonies of male menopause.

Many times, climacteric is not easy to diagnose because it sometimes exhibits vague symptoms. A physical examination and the measurement of testosterone levels should reveal the onset of male menopause. Unless the condition is interfering with daily activity, it can be easily managed without treatment. The first treatment toward alleviating the effects of male menopause is embracing a healthier lifestyle, including reducing stress, eating a healthy diet, exercising regularly and sleeping enough. When going through depression, the doctor may prescribe an antidepressant or therapy.

Another treatment option for male menopause is hormone-replacement therapy. However, it is worth noting that just like other steroids, the synthetic hormone may have adverse side effects. Men who have prostate cancer may experience a growth in the affected cells after they partake in this treatment.

What Are the Causes? 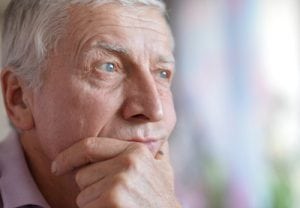 However, when the body is not able to produce enough of the testosterone hormone, the man suffers from climacteric. Factors that can lead to early menopause in men include alcoholism, a sedentary lifestyle, drug abuse and smoking, among others.

Hormonal changes in men occur very slowly, and the gradual change means that many of them deal with the symptoms without realizing that they are actually getting into the dwindling levels of testosterone. In fact, most men remain fertile even in their 80s despite the occurrence of menopause.

Climacteric, also known as male menopause, can be defined as a psychological phenomenon. This term appeared in the medical literature in the 1940s for the first time. Doctors haven’t been able to diagnose this condition until recently as they were still debating the topic among themselves. Today, investigation on the male aging process is still ongoing, and research is incomplete.

Unlike the female version of menopause, not all men experience early and late climacteric. The condition also does not involve a complete shutdown of male reproductive health. When a man enters climacteric, he begins to experience a significant drop or a gradual decline in the levels of testosterone. However, a man’s sperm continues to be produced, and he can still father children.