You are here: Home / Andropause / Aging and Decreasing Testosterone: When is it Time to Intervene?

Menopause in men, also known as andropause, normally occurs when men are in their 50s and is attributed to the lowering of testosterone levels.

A common concern among older men is the changes on their bodies. These men usually wonder whether the physical and emotional changes they are experiencing as they age are normal, what andropause actually is, and at what point in the aging process they should seek medical intervention. As you continue reading this blog, you will definitely get clear answers to these and other questions you might have about this common condition.

Andropause is a phenomenon that is known to many as “male menopause.” It is usually characterized by low testosterone levels, the basic male sex hormone. This hormone is responsible for male bone formation, sex drive, development of the reproductive tissue and stamina. If the level of this hormone decreases, older men may begin to experience both physical as well as emotional changes.

Symptoms and Effects of Old Age and Andropause

There are many common symptoms of old age, including depression, loss of sex drive, memory loss and fatigue—all of which are pretty much short-term. There are, however, some more serious long-term effects that appear as andropause progresses. They include erectile dysfunction as well as other circulatory problems, heart problems, dementia, bone loss and frailty. These problems are why andropause can be so worrisome for men as they age.

When is it Time to Seek Medical Intervention?

Experiencing just one or two of the symptoms of andropause can be dismissed as normal. However, medical intervention is very necessary when dealing with the long-term effects of the hypogonadism. Effects like heart problems and erectile dysfunction can hardly be ignored, and those suffering from them should receive medical attention as soon as possible.

How Andropause is Diagnosed

Andropause is not easily diagnosed due to the fact that its symptoms differ substantially among men. Another reason is that measuring the testosterone levels in the blood and comparing them to a give threshold level is not conclusive. Because of this, doctors use the Androgen Deficiency in the Aging Male (ADAM) and Aging Male Symptoms (AMS) tests. The two are questionnaires that are filled by the patient and are meant to help the doctor to diagnose andropause.

Once the questionnaires are filled, the doctor can now tell whether a given man has a testosterone deficit. The doctor then confirms the results by running a test on the testosterone levels in the blood. It is also essential for the doctor to make sure that that they rule out any other ailments that could be producing similar symptoms.

Treatment and Prevention for Andropause

Even though some symptoms of andropause are irreversible, others can be treated by raising the testosterone levels in the blood. The following are some of the common treatments prescribed to men with andropause:

Replacing testosterone in the blood 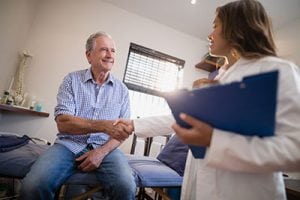 This treatment has been very successful in improving the quality of life led by men going through andropause. Even though it has a number of risks, it is effective if used alongside lifestyle changes like good nutrition, reduction of stress, and exercising.

Testosterone injections are administered by the doctor. This is a treatment that involves injecting testosterone cypionate and testosterone enanthate, once every two to four weeks, in the buttocks muscle. The treatment has side effects, including mood swings. It is important to note that men with prostrate or breast cancer should not take testosterone shots. The advantage of injections: The hormone works over a longer period, because it is stored in the body.

In this treatment, the patient applies a gel containing testosterone once a day, usually in the morning, directly onto the skin, usually on the upper arms, shoulders and stomach. The testosterone is then released through the skin for 24 hours evenly into the blood. It’s important to note that the patient must wash their hands thoroughly and take other preventative measures to assure that the testosterone does not transfer to other people.

Due to its effects on the health and general wellbeing of older men, andropause is drawing global attention. Not only does andropause and its symptoms affect older men but also those around them. Recently, there has been an increased sensitization of this condition among the general public. Medical professions throughout the world are continually researching various ways of preventing this condition in future generations.