You are here: Home / Menopause / Study Finds Fitness Has No Impact on Risk for Early Menopause

Science is constantly discrediting things we once thought were facts. For years, due to no extensive scientific research, people believed that remaining in shape could delay the onset of menopause. As a result of a recent study, however, it now appears that exercise and fitness play no role in the onset of menopause. It doesn’t delay or accelerate it. This new study, though, does suggest that certain actions can be taken to avoid early menopause.

Previous, less expansive studies have produced conflicting results. These studies have claimed that being athletic or active could push menopause back. It has been stated that exercising could prevent menopause before the age of 45. The new study suggests that this isn’t true.

This new study, which was published in Human Reproduction, a health journal, found no corroboration between exercise and menopause. A total of 107,000 women between the ages of 25 and 42 were a part of the study.

Size and weight were not considered factors in this research. Despite popular belief, size and physical activity are not directly related, therefore they were ignored for the study. Women of all shapes, sizes and activity levels participated, and the outcome was that activity levels played no role in menopause.

Elizabeth Bertone-Johnson, the director of the study, said that even previous studies came to the conclusion that exercise had minimal effect on menopause. Her study has determined that it isn’t a small effect, it is no effect whatsoever.

“Our results, in conjunction with other studies, provide substantial evidence that physical activity is not heavily associated with early onset menopause,” said Bertone-Johnson.

Proteins from vegetables have also been shown to lower the risk of early onset menopause. On the flip side, smoking cigarettes provides higher risk for developing menopause at an early age.

The Importance of Exercise 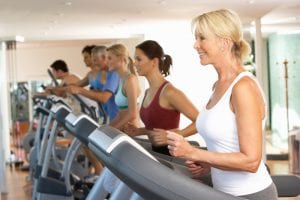 Just because exercise doesn’t play a role in the development of menopause, it doesn’t mean you shouldn’t exercise. Exercise is known to come with a plethora of positive effects. It reduces the chance of diabetes, heart disease and immobility. Exercise can even reduce the risk of developing breast cancer.

“Our results in no way suggest that postmenopausal women should not be physically active,” said Bertone-Johnson.

Smoking, eating a suggested amount of vegetables, and consuming dairy product in relation to menopause isn’t 100 percent conclusive. The study merely suggests a possible link. Further research will be needed to confirm these findings.

Early menopause isn’t something that you can have under your complete control, but the study suggests that some things can be done to avoid early menopause. However, the study claims that exercise just isn’t one of those things.

How Menopausal Symptoms Can Fluctuate During the Holidays
Sexual Rejuvenation: From Supplements, to HRT, to Carboxytherapy