You are here: Home / Menopause / Underweight Women at Risk for Early Menopause

Some women experience issues associated with early menopause, but are at a loss about its cause. Sometimes, a history of being underweight is to blame.

Body composition plays an important role in a woman’s life—no matter her age. Hormonal cycles control the most vital transformational periods throughout growth and maturity. Radical deviations from ideal medical determinations for body composition can be the source of a cascade of problems. One of these problems is early menopause and its link to weight issues during youth.

The Difficulty with Personal Image and Weight

Most people can deduce from social media, entertainment and clothing trends that young women and girls are under a great deal of pressure regarding their body images. Overwhelmingly, the achievement of an extremely lean figure is more desirable than any other pursuit. Being skinny is directly tied to a girl’s sense of self-worth, or her own perception of the potential to take part in a social dynamic.

Unfortunately, it is very easy for girls to slide into a nearly phobic obsession with achieving an unrealistic body image. Even without being diagnosed with clinical conditions like anorexia and bulimia, a girl can live with a body composition that is very stressful to maintain and that can lead to serious issues as an adult. Even at a very early age, girls can develop habits like eating abstinence and compulsive exercise. These habits can be confused with healthy life choices, but they can also affect development.

Definitions and Perception are the Culprits

In the movie G.I. Jane (1997), Demi Moore’s character joins the Navy Seal training program. She dedicates herself to becoming as lean and conditioned as her male counterparts. As a result, she experiences extreme fat loss and hormonal shifts that cause unexpected changes in her body. These changes were typical of women many years older. The achievement of Navy Seal certification, however, was more of a goal than maintaining a healthy feminine body.

Though G.I. Jane was an adult, young women can create similar physiological conditions that do not manifest until years later. Early menopause, while not always caused by weight issues, can definitely occur because of unhealthy body composition during youth.

Many of the uncontrollable aspects of an early propensity toward leanness, over-dieting and unhealthy body image are due to not having knowledge regarding body health. This is especially true when it comes to body composition. Most young girls measure their health and body visually and comparatively. Nothing could be more counterproductive to maintaining female health. 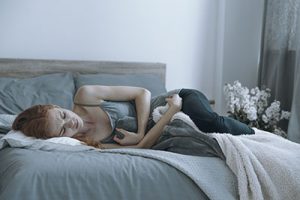 According to trusted institutions like the Mayo Clinic, a young woman’s body fat percentage should measure between 14 percent and 25 percent. This calculation considers differences in body types. A young woman witnessing her body changing as she grows doesn’t have this range in mind. All she sees is an increase in fat on her body. What she probably doesn’t understand is that this increase in fat is the most natural way her body prepares for things like reproduction and immune defense. In the early stages, a girl’s body grows to accommodate a genetically predisposed path for health. If a young woman sabotages this natural growth by having an extremely low body weight, she risks a hormonal imbalance.

In a healthy woman’s body, there are exquisite mechanisms for determining the best conditions for reproduction. Menopause is the feminine transformation from being a fertile body to one that is past the need for a reproductive role. When menopausal hormonal changes are triggered, certain metabolic changes happen as well.

When a young woman insists on keeping her body in an unnaturally lean state, she is telling her body that reproduction is not a high priority. This conditioning can begin as early as puberty when the body is first learning how to align itself to be a vital and healthy reproduction-oriented vessel. In short, underweight pubescent females are shortening their reproductive abilities. An early tryst with unnatural weight loss could mean brain and body programming that results in early hormonal aging. Being underweight during youth means less hormonal support for normal feminine needs in adulthood. Early menopause becomes a very real possibility.

Women who live with continually low fat percentages condition their brain and other organs to function as if they are much older than they really are. This is why women who are at risk for early menopause are also at risk for conditions like osteoarthritis, cardiovascular disease and cognitive function decreases.

When low body fat is sought during the early years of feminine growth, these risk factors are compounded. Though the goal of low body fat in youth can result in a body image that matches unrealistic social expectations, it endangers the normal timing of the female body. Perception and social demands rarely coincide with healthy balances.

Young women should never be afraid and disgusted about how their developing bodies “fill out.” They should seek medical and nutritional expertise about dieting and gauging body fat levels. With a healthy diet, a safe exercise regimen and a realistic view of body image, early menopause never has to be a concern for young women and girls wanting a healthy life.