You are here: Home / Healthy Aging / The Antioxidant Properties of Popcorn That You’ve Never Heard About

When popcorn comes up in conversation, it is usually mentioned as the primary snack for a movie night or even written off as just another junk food. Nicknamed the “perfect snack food,” it is actually a lot healthier than we think, and it’s about time that we gave it its due credit.

In comparison to salty chips and its other counterparts, it is easy for it to be considered “healthy,” but it actually goes a lot deeper than that. For starters, this cinema snack is made of unprocessed whole grain. Just one serving alone will achieve over 70 percent of the body’s whole grain daily intake. And things seem to only get more impressive with this popular corn. Here is how regular consumption of popped corn can transform one’s health for the better.

It is rarely heard of that a snack food can be dense with nutrients, but it turns out that this fan favorite happens to fit the bill. Not only is it loaded with fiber, but it is also packed with antioxidants. Antioxidants are the key to health as they work to prevent or slow the progression of many chronic diseases and other health ailments such as cardiovascular dysfunction, cancer, immune weaknesses, inflammatory disorders, and just about every other illness under the sun. This means that feasting on these kernels can transform our health for the better.

It is even more interesting to place this “fun food” up against some of nature’s other creations. Surprisingly enough, popped corn has a much higher antioxidant count than most fruits and vegetables. The antioxidant that popped corn is abundant in is called polyphenol. Polyphenols are found in plants, herbs, and spices. They are known to clear the body of free radicals, slow down the aging process, fight against obesity, improve heart health, and promote general well-being. In 2012, the American Chemical Society reported that popped kernel contains about 300 mg of polyphenols in one serving versus the average 160 mg present in many fruits and vegetables.

Not only is it loaded with health benefits, but its sole ingredient also cannot be tampered with during the growth process. At the market, you may feel more inclined to grab a box of “non-GMO” kernels versus one without that label. Give yourself credit for attempting to choose the healthier choice, but don’t fall for the hype. The truth is, unlike most other foods, it is literally impossible to genetically modify the seeds used to produce this snack, but keep in mind that some store-bought brands that contain soybean oil and other additives may be genetically modified.

How to Eat Them 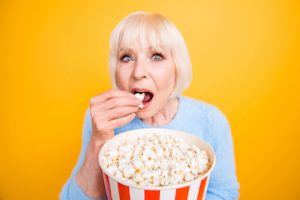 While popped corn is a nutritious gem, its preparation process can make all the difference. To indulge in its many advantages, leave microwavable popped corn on the shelf. The bags suited for the microwave contain perfluorooctanoic acid (PFOA), which has been linked to numerous illnesses such as cancer, thyroid disease, and even infertility. Opt for air-popped kernels instead. Doing so will also save you half the calories.

As tasty and nourishing as popcorn is in its natural state, playing it up with too many unhealthy and fattening additives can take away from its many benefits. Instead of drenching your kernels in heavy oils and butter or sprinkling them with artificial sugars, try enhancing them with these tasty ingredients:

Don’t limit yourself to just those flavors. You can add other herbs and spices that will enhance the taste without stripping its nutritional contents. Also note that there are ways to pop kernels on the stove without using oil, but if you do choose to use some, try lighter oils such as extra virgin olive or canola.