You are here: Home / Healthy Aging / Understanding How Our Brain Changes With Age

As we grow older, the brain changes in many ways. In general, these changes result in impaired brain function.

Memory loss and decreased mental acuity are often the result of aging as the brain physically shrinks and alters in certain aspects. The good news is that it’s possible to make lifestyle choices that can decrease the negative effects of aging on mental function.

How the Brain Changes

As we age, our brains undergo a gradual change. It’s important to note that this is “healthy brain change,” which is different from Alzheimer’s and dementia. While those afflictions can lead to rapid and catastrophic decrease in brain function, normal changes in our brains as we age are far less dramatic and severe.

Once we reach the age of 40, our brains decrease in mass by about five percent per decade, with greater losses observed after the age of 70. It’s worth noting that the changes in the brain aren’t universal; instead, a few specific regions tend to shrink as we age.

Two areas where a decrease in mass is usually observed are the hippocampus and the frontal lobe. These regions are instrumental in processing memories. Certain other areas of the brain that are responsible for general cognitive function get smaller as well.

One of the biggest areas of impact as we age is the decrease in memory function. It becomes more difficult to create new memories, and old memories may start to fade as well. It may become more difficult to remember words or phrases, as well as people and places. Remembering numbers can often be challenging, as well.

Multitasking becomes significantly more difficult as the brain ages. In addition to a decreased ability to focus on more than once task at once, it can be more difficult to focus in general.

Another area where we may notice the decreasing cognitive function is in our ability to learn and pick up new skills and tasks. It appears that some of the regions in the brain responsible for helping us learn atrophy as we age, making us less capable of acquiring new concepts and routines.

These effects begin after the age of 40, but they only really start to become noticeable after the age of 60 in most cases. There’s no hard and fast rule as to when or how much brain changes due to aging will impact any given person. Some people feel the effects more strongly, while others are more resistant to these effects.

How to Keep the Brain Healthy

Researchers have devoted much effort and countless studies to observing the effects of age-related mental decline and have identified several ways in which you can help fortify your brain as you age. It’s important to understand that genetics plays a role as well; some people are more naturally resistant to age-related mental decline than others. But research shows a clear link between certain activities and better mental outcomes as we age. 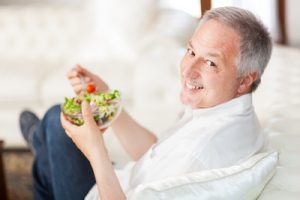 The diet we eat has an impact on our cognitive health as we age. Specifically, certain nutrients and compounds found within seafood seem to have a positive effect on brain health. Eating seafood even once per month can show significant results over the decades.

A compound called lutein, found in spinach, kale, avocados and eggs, has been linked with stronger cognitive function in older people. Consuming healthy quantities of lutein-rich foods can increase your chances of being mentally healthy at an advanced age.

Studies have shown that people who maintain an active lifestyle and get regular exercise have sharper cognitive function and stronger memories than those who don’t. Ideally, this exercise would happen at least once every other day, be a mix of aerobic and anaerobic workouts, and last about 45 minutes.

Another way to ward off age-related brain decline is engaging in mentally stimulating activities. Studies demonstrate that people who engage in art, literature, music and intellectual pursuits have better cognitive function at an advanced age than those who don’t.

Playing a musical instrument is an excellent way to increase brain health as we age. It appears that the act of playing an instrument forces systems within the brain to cooperate in a complex way, keeping the brain more active and healthier.