You are here: Home / Healthy Aging / Why We Become More Susceptible to Pneumonia as We Age

Pneumonia is a lung infection caused by either bacteria, a virus or fungi. According to the American Lung Association, it is spread through close contact, sneezing or coughing and can be transmitted by those without symptoms, as well. Anyone can develop a lung infection if exposed; however, older people tend to be more at risk for serious complications.

This is due to the diminished ability of their immune systems to fight off illnesses. Likewise, people in this age group often have other health conditions that further lower their immunity to conditions like pneumonia. Once contracted, pneumonia leads to the alveoli’s, or air sacs’, filling with fluid, reducing the oxygen inside the blood. Symptoms include shortness of breath, wheezing, fever and coughing.

In an aging populace, it is quite common to find older people who have serious pre-existing conditions, such as hypertension, diabetes, arthritis, kidney disease or even other lung conditions, like emphysema. All of these diseases reduce a body’s ability to fight off invading viruses, bacteria or fungi. This is the primary reason that pneumonia is such a risk in older people. 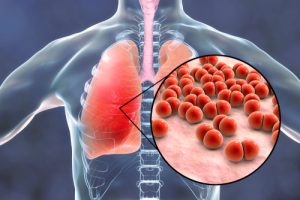 When the body’s defenses are down, the invading agent can gain a foothold, and in those with other conditions, the risk of complications becomes a very real danger. The primary symptoms of pneumococcal infection include breathing trouble, and consequently, serious complications may include inflammation of the sac surrounding the heart and lungs, confusion and collapse of the lungs leading to intubation.

The mortality rate in serious cases among the elderly can be as high as 20 percent. For seniors in close quarters, it is important to point out that community transmission is also a possibility.

Treatment for pneumonia at any age will depend on the type of infection. In bacterial pneumonia, antibiotics are most often prescribed to clear up the infection. In a viral infection, a doctor may prescribe antiviral drugs; however, this is not always the case. Decisions on which medications are utilized will often depend on the patient’s overall health at the time of diagnosis. Viral conditions are often treated by tending to symptoms so that further complications do not arise. In diseases caused by fungi, antifungal drugs are prescribed to rid the body of that type of infection.

There are a variety of preventive actions for those at the highest risk of infection of the lungs. First, it is of great importance to take control of any other chronic illness that may reduce immunity to other serious health issues. Next, see a physician immediately if exposed to someone displaying symptoms of any kind of illness. Likewise, avoid unnecessary exposure to anyone thought to be sick. Ask family and friends to stay away if any illness is suspected, particularly during the cold and influenza season.

One highly effective method for avoiding infection after age 45 is by asking for the one-time-only pneumococcal vaccine. It is also recommended that everyone, especially elderly patients, receive an annual influenza vaccination, as well, since flu has the potential to develop into pneumonia.

Staying healthy, seeking medical advice at the first sign of possible sickness, steering clear of anyone known to be ill and practicing good personal hygiene are a few simple steps that can reduce the odds of lung infection.