A substance known as melatonin can be a vital immune system-booster for aging individuals. There are some easy methods that you can employ to ensure that you are receiving sufficient quantities.

The substance is a hormone that is produced inside the brain. Arguably, the chemical is most commonly recognized for regulating the body’s circadian rhythm, which helps control a person’s sleep cycles. That said, many organs possess melatonin-receiving cells such as the heart, liver, kidneys and intestines, and it contributes to several internal functions.

Aside from playing a major role in promoting sleep, the substance is also believed to aid the body in the digestion and synthesis of several metal substances, bone density, and regulate the function of fat cells.

Impact on the Immune System

Some members of the medical community suggest that melatonin’s most vital role is that of an immune system booster. Researchers conclude that the substance is a powerful antioxidant. Antioxidants are systemic substances like hormones and nutrients that protect the body from an accumulation of inflammation. Inflammation is often the culprit behind the development of physical injuries and, when left unchecked, could ultimately precipitate the onset of various potentially serious ailments such as immune system disorders, diabetes, and cancer.

Apart from its antioxidant qualities, scientists cannot conclusively determine how the hormone additionally benefits the immune system. However, many of these medical professionals opine that the chemical fosters the secretion of specific systemic substances known for their infection-fighting properties, particularly particles called cytokines.

Impact of Aging on the Immune System 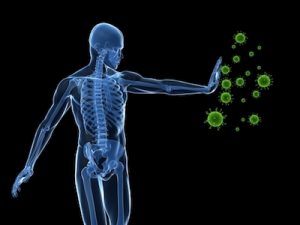 Numerous studies have been conducted gauging melatonin’s impact on the immune system in individuals older than 60. In many instances, the results have shown that those with melatonin-based deficiencies experience greater incidents of illness than those who do not. Members of the healthcare community suggest that this can be attributed to the hormone’s disease-ebbing capabilities, as well as its sleep-inducing properties. Most doctors agree that a lack of sleep often contributes to a weakened immune system.

In addition to producing fewer disease-fighting organisms, the bodies of many elderly individuals also synthesize and secrete less melatonin. This combination can prove detrimental to an aging person’s health. Fortunately, deficiencies can be corrected through diet, dietary supplementation and other natural methods.

Such endeavors include the following: