You are here: Home / Menopause / Increased Chance of Early Menopause or Hysterectomy in Women Who Gave Birth as Adolescents

According to new research presented in Vancouver at the World Congress of Menopause, adolescent mothers are more likely to have early menopause or even have a need for a hysterectomy.

A hysterectomy is the surgical amputation of the reproductive system in women. It mostly involves the removal of the uterus, but it can also involve the cervix, the fallopian tubes and the ovaries, depending on the scenario. This procedure can have an effect on the symptoms of menopause. Menopause is the point where a woman’s menstrual cycle stops and it becomes impossible to bear children. Conversely, early menopause is the stage where a woman reaches menopause before the age of 40 years.

According to the data collected from a recent study from International Mobility in Aging Study pioneered by Canada, adolescent mothers experience a higher chance of early menopause than those who bear children later. This study involved the health history records of more than a thousand women from different countries. According to the findings, it was found that those women who bore a child under twenty years of age eventually experienced menopause before they reached forty-five years old. This was from the 43 percent representation of the women who participated in the study.

The study also found out that half of the women who had early menopause had a uterus amputation later on. The data revealed that there was a higher chance of about 64 percent of adolescent mothers undergoing a uterus surgery than those who bore children later (p=0.01, OR=1.64). The data proved that there is a relationship between early menopause and uterine surgery. 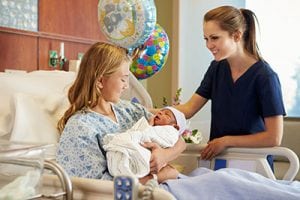 Dr. Catherine Pirkle and Dr. Maria Velez from the study found out that having children early leads to the woman experiencing menopause earlier and increasing the likelihood of reproductive system surgery.

Menopause at a later age is associated with a better life, such as increased lifespan and reduced rates of cardiovascular ailments. This means that early menopause and any surgery involving the uterus have adverse health effects. This is because they reduce cognitive health, life expectancy and quality of life.

Reasons for Hysterectomy in Women

Some of the reasons for having a hysterectomy include severe cases of endometriosis, adenomyosis, placenta previa, vaginal prolapse, uterine fibroids, among others. The conditions only lead to amputation if all other therapeutic efforts fail. Some women may also decide to have the operation because they do not want to bear children. The desire to have the surgery out of no therapeutic cause is discouraged due to the side effects of the operation.

Risks Associated with the Operation

The operation is major surgery, and it can lead to many complications. The impediments include urinary incontinence, which is urine leak after laughter or coughing, fistula formation (abnormal connection of the bladder and the vagina) and vaginal prolapse, which is characterized by the vaginal parts protruding out of the body. Wound healing disorders, inflammation and bleeding are also possible. Affected women should be fully informed about the consequences, as well as the pros and cons of the procedure and various surgical techniques, before deciding to have a hysterectomy.

From the study, it is evident that there is a relationship between early childbirth and early menopause. It is also evident that there exists a connection between early menopause and uterus surgery in women. From these findings, it would be optimal to educate adolescent mothers to be able to deal with their health in the future. It also offers an opportunity for adolescent mothers to seek therapeutic intervention in order to minimize the risks associated with early motherhood.