A new study suggests that a woman’s health during pregnancy may be linked to hot flashes during menopause.

The study, conducted by University of Oklahoma’s health science center, suggests that a woman’s health during pregnancy is even more important than previously thought. The research suggests that women who suffer from dangerously high blood pressure, pre-eclampsia, and/or gestational diabetes are more likely to suffer from symptoms during menopause.

For the study’s purposes, the researchers observed a group of 2,200 women throughout the nation.

The Same Underlying Cause

The study’s researchers believe that high blood pressure, pre-eclampsia, and gestational diabetes during pregnancy and menopause are caused by the same condition, vascular endothelial dysfunction.

Vascular endothelial dysfunction is a reversible condition, characterized by an imbalance in the inner lining of the blood vessels, which causes them to malfunction. Though this study does not explore this, it has also been linked to atherosclerosis. This condition is often caused by an elevated weight.

This study aims to help medical professionals understand and treat the symptoms and the causes of menopausal conditions.

How Common Are Hot Flashes?

The researchers state that approximately 80 percent of women experience these uncomfortable flashes during menopause. This study may lower this number by raising awareness of what causes them. It may inspire women to be healthy before, during, and after pregnancy. 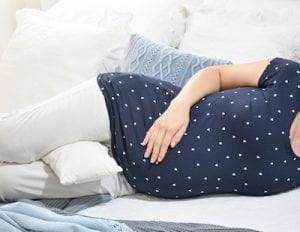 Both of these conditions can be caused by lifestyle and/or genetic predispositions. Nothing can be done about the genetic component, but there are a few ways to try to avoid these conditions during your pregnancy.

Hydration is very important to your overall health and will help you have a healthy pregnancy. Drink at least eight glasses a day and try to abstain from caffeinated beverages as much as possible.

Medical professionals monitor a woman’s weight during her pregnancy. It is widely known and accepted that overweight women have a more difficult time during pregnancy. This new study suggests that two conditions that are common in pregnant overweight women, gestational diabetes and pre-eclampsia (dangerous high blood pressure during pregnancy), are linked to hot flashes later in life, during menopause.

This study raises awareness of this link and suggests that there is a root cause, which is vascular endothelial dysfunction. This condition is reversible, and women should actively consult their doctors to monitor it and form preventive strategies.