You are here: Home / Menopause / The Effect of Resveratrol on Menopause

A substance known as resveratrol might exhibit a positive impact on the female health phenomenon called menopause.

A Brief Discussion About Menopause

This naturally-occurring period in a woman’s life is precipitated by a rapid decline in the production and systemic concentrations of vital sexual and reproductive hormones: estrogen and progesterone. Typically, beginning when a woman reaches her late forties or early fifties, gradual hormonal decline will eventually result in the cessation of menstrual cycles that will ultimately culminate in a woman’s inability to bear children.

Additionally, hormones, such as estrogen, are crucial to bone vitality and cardiovascular health. Therefore, declining levels of this substance might also precipitate more serious medical issues like osteoporosis and heart disease. 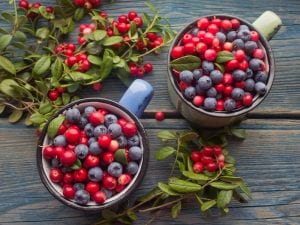 Resveratrol is a plant extract that is found in the seeds of certain fruits and berries. Medical researchers and health professionals argue that this substance displays antioxidant properties. Antioxidants are chemicals that prevent potentially harmful environmental allergens and toxins, known as free radicals, from wreaking havoc on the body.

The accumulation of free radicals inside an individual’s cells, tissues, and organs can precipitate inflammation. If severe enough, inflammation may result in bodily injury, causing pain, or could possibly lead to serious illnesses- including diabetes and cancer.

A 2017 research study conducted by a team of Australian scientists from Newcastle University found that resveratrol may slow the progression of the aging process in menopausal women.

The researchers studied 80 subjects who were in post-menopausal stages. Half of the study’s participants were administered a preparation containing resveratrol, while the others were given a placebo two times per day over a period lasting more than three months.

The team concluded that those who ingested the resveratrol supplement saw an improvement of their mood, experienced less physical pain (often precipitated by joint and bone conditions like osteoarthritis and osteoporosis) and expressed a greater feeling of general well-being.

This substance is part of the chemical makeup of many foods and beverages people commonly consume, such as grapes, peanuts, dark chocolate, and various berries (blueberries, cranberries and bilberries). However, the largest concentrations of resveratrol might be found in a popular adult beverage: red wine.

Additionally, the substance can also be found as an ingredient comprising various nutritional and dietary supplements that are readily available for purchase either online or at pharmacies and nutritional supplement retailers.

The Australian researchers suggest that their findings demonstrate the value resveratrol plays in the maintenance of optimal health and that the substance might soon be prescribed in greater quantities as a means of remedying specific manifestations experienced by menopausal and post-menopausal women.