You are here: Home / Healthy Aging / The Anti-Aging Benefits of Chocolate

Chocolate is a popular dessert made from a historically used plant, but its rich flavor is not the only perk. Research on the cocoa-bean-derived treat has revealed that its nutrients have anti-aging properties.

The consumption of chocolate has been traced back to the Mayans in the Central Americas and the Olmecs of Mexico. Using the fruits of cacao trees, the cacao beans are extracted and roasted to make cocoa beans. From these beans, cacao nibs are ground to produce a bitter, rich liquid that was consumed regularly.

The chocolate bars we know today take a great deal more processing. The cocoa liquor is separated from the cocoa butter and refined, usually through alkalization, cooling and solidifying. There are also a number of additions like sugar, milk, vegetable oils and hydrogenated fats. The range of cocoa solids in cocoa-derived treats can be anywhere from 50 to 90 percent. Chocolates are generally classed as treats for one’s guilty-pleasure—so how could they aid with anti-aging?

Aging is a natural process that happens to everyone. Your body cells retire from growing or making new cells, which results in tissues’ becoming more susceptible to damage and disease. Certain genes, called splicing factors, gradually deactivate, causing old cells to stop dividing. According to a study done by the University of Exeter, an antioxidant called resveratrol was found to re-activate splicing factors, revitalizing aged cells. They looked miraculously younger and were dividing once again, combating the effects of aging. 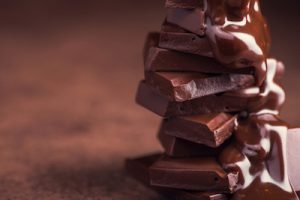 As it turns out, cocoa beans happen to have resveratrol, as well as an abundance of other antioxidants. Antioxidants fight against oxidants, or free radicals, which come from the environment and accumulate within the body. Flavanols are among such antioxidants, and they are found in copious amounts in cacao beans. Although they are also in fruits, teas and even wine, chocolate’s nutrient composition has the most flavanols by comparison.

Flavanols are key in anti-aging, as they help in producing nitric acid, which improves blood flow. An efficient circulation system is important to getting oxygen to the brain, heart and skin. More nutrients can reach your tissues and organs, leading to nourished skin and better health. Also, a host of other conditions can be prevented, such as high blood pressure, high cholesterol, cardiovascular disease and diabetes.

Necessary minerals like magnesium, iron and zinc are present in cocoa beans. Magnesium, in particular, is important because our body needs a good amount of it for processes to function. The heart and bones need magnesium for optimal health. Iron helps with transporting enough oxygen to the body, and zinc boosts the immune system to fend off illnesses.

These nutrients and others like potassium, selenium and phosphorus all help to maintain the body as we age. Cocoa beans also contain caffeine, a stimulant that can give a boost in your energy levels and mood. It helps increase serotonin production in your brain, acting as a natural anti-depressant. Being happy is vital, helping us feel younger at no matter what age.

How to Eat Chocolate

Chocolates that are at least 70 percent cocoa solids are the most beneficial for anti-aging, since they have the most flavanols. Avoid extra ingredients like milk, which has been shown to cancel out the effect of antioxidants, and sugar, which can reduce the health impacts, especially if eaten in large quantities.

Natural, organic dark chocolate that has been minimally processed is the best to consume for anti-aging effects. Eating about an ounce of dark chocolate on a daily basis shows the most benefit from antioxidants. Moreover, it is a mouthwatering treat, so your health is the perfect excuse to indulge in it.