You are here: Home / Andropause / The Connection Between Testosterone and Antioxidants

The intake of dietary antioxidants can have a direct impact on a man’s general health and systemic testosterone concentrations.

Antioxidants are specific nutrients found in certain foods that protect the body’s cells from damage and disease. These chemicals perform this process by cleansing the cells of toxins and allergens known as free radicals. Free radicals are potentially dangerous waste products that can damage cells through the creation of inflammation.

Inflammation often precipitates physical, pain-inducing injuries. However, should inflammation occur in tissues and organs, the process might eventually elicit a variety of serious health maladies such as heart disease, cardiovascular disorders, autoimmune problems, and diabetes. As a man ages, he becomes more susceptible to cellular damage and the development of various illnesses. Therefore, consumption of antioxidant-rich foods takes on greater importance as the aging process progresses.

Testosterone, sometimes simply referred to as “t,” is the chief male sexual and reproductive hormone, and it plays a vital role in helping men develop physically and sexually. The substance precipitates the onset of puberty (the stage when boys begin maturing into men) and fosters muscle, bone and reproductive organ development, and regulates libido (sex drive). Each of these processes and functions are critical to men during their lifetimes and diminished levels of testosterone may produce a host of undesirable symptoms.

That said, excessive production of the hormone might also prove problematic. Among the manifestations that might result from too much testosterone is suppression of the immune system. Some researchers opine that the increased intake of certain antioxidants could possibly inhibit this potentially serious issue.

The Results of a Study 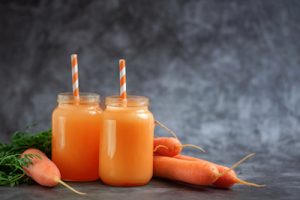 In the early 2000s, a team of researchers representing Arizona State University studied carotenoids, powerful antioxidants that give carrots and corn their distinct orange and yellow coloring, and their impact on the anatomies of birds. Carotenoids are thought to play a critical role in protecting a bird’s immune system.

With that information in mind, the study’s organizers examined the influence increased testosterone had on more than 30 zebra finches. Each bird also consumed a diet high in carotenoids. Scientists discovered that the antioxidants gave the subjects a greater ability to metabolize the hormone and strengthen their immune systems. The examiners further opined that such findings are promising in terms of potential usages of specific antioxidants in humans.

Antioxidants are typically most prevalent in natural products such as fruits and vegetables. Produce items including cranberries, blueberries, raspberries, strawberries, goji berries, apples, cherries, plums, raisins, prunes, kale, spinach, beets, artichokes, red cabbage and sweet potatoes contain high levels of important antioxidants. However, these critical nutrients are also abundant in other edible items such as dark chocolate, nuts like pecans and walnuts, legumes like beans and beverages such as red wine.