You are here: Home / Healthy Aging / Travel May Be the Secret to a Longer Life

Research has found that travel is not only good for your soul, but it may even help you live longer.

Travel has been shown to make you a happier person! A study indicated that 86 percent of the people who travel feel more satisfied with their lives compared to 75 percent who do not travel.

An Australian study found that even the time that we spend planning and dreaming of a vacation, provides an automatic mood booster. Therefore, having a positive impact on the mind and body.

As we age, our brains shrink. This can lead to a decline in cognitive skills (thinking skills). This is considered to contribute to moments of forgetfulness that many experience with aging. A study showed that over the course of 18 months, ‘normal’ agers lost volume in the cortex (the area linked to critical thinking), twice as fast as “Superagers”. Superagers are those in their 70s or 80s who have the mental and physical capabilities of their decade younger counterparts. These “Superagers” brains were found to be similar to people in their 50s.

Many claim that travel helps to keep life more interesting. The more that you travel, the more that you can learn. Therefore, keeping your brain actively learning new skills and meeting new people. Our brains thrive off of challenge and newness. The study explains that these “SuperAgers” have a common denominator of being socially active and many are avid travelers. Traveling and meeting new people may help to keep your brain working. When you travel there is a built in sense of community, traveling with friends or family or in a group as you get older may help you connect with similar people.

Being in a new place stimulates the brain in ways that can help to improve your memory and mental focus. 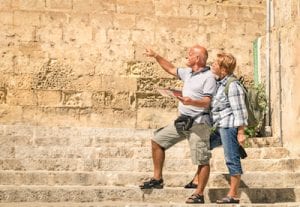 In life, many people have daily stress that they carry around. Traveling and taking vacations has been found to be a good way to relieve stress. When on vacation you spend most of your time wondering around a new city and leaving the stress from home behind. Stress has been linked to many different health issues later on in life. Many feel that a vacation is simply a luxury that they can not afford. However, research has found that traveling and going on a vacation can actually help you to be more productive when you return to work.

The Helsinki Businessman Study composed research on a group of 1,222 male executives, with at least one risk factor for heart disease. These factors could have been that the men smoked, were overweight, or had high blood pressure. The men were born between 1919 and 1934, and the study expanded through the 1960’s into 2014. The men were split into two groups, one that lived their lives without any intervention. The other group was given advice on how to improve their health, such as improving their diet, exercise, and to stop smoking. The study found that the men who improved their lifestyles had a higher mortality rate, if they did not take the time to go on vacations. After a 15 year check in of the study, they found that the men within the intervention group that improved their lives had a 37 percent higher chance of dying if they took vacations that lasted less than three weeks when compared to those who took vacations lasting three weeks or more. The reason behind this is that the group taking less vacations were found to be working too hard, not sleeping enough, and not taking enough vacation to relax.

Take the Time to Explore

Travel is not only exciting, but it can be enlightening. It is important to take time for yourself, especially when things start piling up. Taking time to travel or go on vacation may be the secret to helping you live a longer and happier life. There are many benefits found along with traveling, why not put in for those days off and go on an adventure!