Postmenopausal women who are given a certain type of hormone therapy have been found by the Women’s Health Initiative to experience an increased risk for breast cancer.

The Women’s Health Initiative (WHI), which was started in 1991 and released results in 2010, involved three clinical trials and one observational study that were designed to investigate the high rate of mortality in postmenopausal women. The study found that women given a certain combination of hormone replacement therapy drugs were more likely to have an increased risk of breast cancer.

What is the Link Between Postmenopausal Hormone Replacement Therapy and Breast Cancer?

Hormone Replacement Therapy (HRT) has long been used to ease the symptoms of menopause. The WHI looked specifically at such health risks as osteoporosis, cardiovascular disease and cancer by following 161,808 women over a period of 15 years. One of their clinical trials explored the link between HRT, which included either estrogen alone or the combined hormones of estrogen and progesterone, and the incidence of breast cancer. They also studied the effects of diet and vitamin D and calcium supplements on these risks. They found that breast cancer risk could increase by as much as 75 percent after using hormone therapy.

What Type of Hormone Therapy Increases the Risk of Breast Cancer? 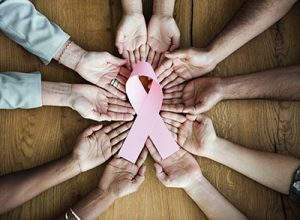 The WHI found that breast cancer risk increased after using the combined hormones for only two to three years, but it took 10 years or more of using estrogen alone for the effect to occur. However, estrogen therapy is not recommended in women who have not had a hysterectomy because it has been linked to an increased risk for ovarian cancer.

What Kind of HRT Can Decrease Breast Cancer Risk?

The WHI found that short-term use of estrogen alone can decrease the risk of breast cancer but because it can increase the risks of ovarian and uterine cancers, only women without a uterus were assigned to the estrogen-only treatment. However, it should be noted that this study did introduce a confounding variable in that only women with a uterus were given combined hormones and only women without were given estrogen, but there was no control for the effect of hysterectomy on breast cancer risk.

Estrogen and progesterone therapy have this effect because many types of breast cancer have receptors for these hormones and their presence can cause tumor growth. Over the past few years, selective estrogen receptor modifier (SHERM) therapies have been made available. These drugs, such as Tamoxifen and Raloxifene, can relieve many of the postmenopausal symptoms without increasing breast cancer risk.

What are the Alternatives Available for Postmenopausal Symptom Relief?

There are several non-hormonal treatments available to deal with the symptoms of menopause. These tend to be antidepressants such as paroxetine and fluoxetine that have also been found to be effective in treating symptoms such as hot flashes. Gabapentin, which is primarily used in the treatment of seizures and the nerve pain of fibromyalgia, can also be effective.

There are also natural treatments that can be considered. Some think of plant-derived estrogens as a safer alternative, but the body still recognizes phytoestrogens, so they are not recommended for women with a history or other increased risk of breast cancer. Herbal treatments such as black cohosh have been used by some to treat hot flashes but are not generally recommended because they can stimulate breast tissue. Behavioral treatments such as relaxation exercises or yoga might be helpful in reducing stress and, thus, alleviating postmenopausal symptoms. However, studies have not supported these alternatives.

Underweight Women at Risk for Early Menopause
Menopause and Alcohol: Do They Mix?