You are here: Home / Menopause / Women Who Smoke and Have Early Menopause See Increased Risk of Bladder Cancer

Women who smoke and experience early menopause are at a greater risk of developing bladder cancer. Quitting smoking is better for your health overall.

Study on Early Menopause and Smoking

A study was performed by a group of researchers led by Mohammad Abufaraj, a urologist at the Department of Urology and Division of Epidemiology from MedUni Vienna. The findings revealed that women who are smokers and who go through menopause early have a much higher chance of developing bladder cancer.

The scientists who performed the study looked at a number of factors and determined that factors that are hormonal in nature alone generally did not have an effect on the potential of developing bladder cancer. However, when women were younger than 45 years old and experienced menopause while they were also smokers, their risk was increased by as much as 50 percent. At this time, the results are still unpublished but were presented at the European Association of Urology (EAU) Congress in Barcelona, Spain.

Every year, around 1,600 people in Austria develop bladder cancer. In general, men are around four times more at risk of developing the disease than women. At the same time, women have a far higher mortality rate from bladder cancer, at 40 percent. The reasons for the remarkable difference between the genders is currently not understood.

Why Are the Risks So High for These Women? 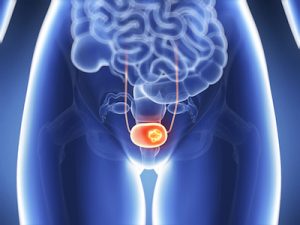 The question of why the risk of bladder cancer is so much higher for women who smoke and go through menopause at a younger age was explored by Abufaraj and his team of researchers from MedUni Vienna and Harvard Medical School. They looked into whether the hormonal workings of a woman’s body played a part in the cancer’s development by analyzing data from sources that have been around since 1976. The Nurses’ Health Study and Nurses’ Health Study II helped them get some answers.

As the largest women’s health study around the world, the Nurses’ Health Study shows plenty of important findings that revolve around nutrition and the risks of cancer through clinical exams and questionnaires of female patients. At first, the nurses were merely invited to participate in the study because of their excellent medical knowledge. Study participants were followed and surveyed every two years about their diets, lifestyle habits and contraceptive methods.

What Did the Research Findings Reveal?

While the researchers conducted their work, they discovered that there were 629 cases of bladder cancer in women. They compared the findings of women who began menopause after age 50 to those who started before 45 and determined that the latter group had a higher risk of getting bladder cancer. In addition, they also discovered that women in that group who smoked and reached menopause earlier in life had a 53 percent greater risk of developing the cancer.

Abufaraj stated that the research also determined that other factors, including the age the women first got their periods, number of pregnancies they experienced, use of the pill and hormone replacement therapy did not play a part in their increased risk for bladder cancer.