You are here: Home / Healthy Aging / A Beverage to Boost Testosterone and Libido

When it comes to aging, many doctors consider natural approaches to help avoid health risks due to fluctuating hormone levels but often times neglect the idea of maintaining a healthy sex life. As we age, changing hormones and specifically testosterone can play a variety of roles on the body including altering the libido.

For many years, pomegranate has been an important fruit for its medicinal properties and the ability to boost testosterone levels. Pomegranate juice contains major antioxidants, including tannins, ellagic acid, and anthocyanin. These antioxidants work to enhance blood circulation and fight breast cancer, prostate cancer, and other conditions. They minimize the chances of heart disease and inflammatory conditions, and they also minimize the signs of aging. 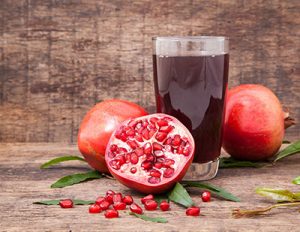 Testosterone is a male sex hormone that defines a person’s characteristics, including muscle mass, deep voice, facial hair, and libido level. Although the levels of testosterone decline with age, drinking pomegranate juice can be helpful in maintaining reasonable levels of this hormone even during old age. Reduced levels of testosterone can cause health problems, brain fog, weight gain, reduced energy, depression, and can also lower libido. In women, testosterone also plays a role in health by regulating estrogen levels. In women, this hormone also serves as a natural libido booster.

Taking pomegranate juice is a natural way of increasing the levels of testosterone in the body. The juice works by blocking the production of estrogen, which is the primary sex hormone in women. According to a research conducted at Beckman Research Institute in California, pomegranate juice contains ellagittanins, which are substances that prevent the body from converting androgens into estrogen. Excessive estrogen in the body hinders testosterone production; hence, estrogen levels have an impact on the levels of testosterone in the body. Too much estrogen also decreases sex drive, weakens bones, and hinders erectile health.

A study conducted at Queen Margaret University in Scotland confirmed that taking a glass of pomegranate juice every day increases the levels of testosterone by about 24 percent. Other benefits that come with improved levels of testosterone include reduced stress and blood pressure, increased positive emotions, and hormone balance.

Other Benefits of Pomegranate Juice

Besides improved testosterone levels and libido, there are many other benefits derived from pomegranate juice throughout life and into our aging years. These beenfits include:

Obesity exposes the body to heart disease, diabetes, erectile dysfunction, and other serious conditions. To reduce the body weight and prevent obesity, pomegranate juice works by fighting hunger pangs and creating a sensation of fullness. Researchers believe that the juice contains antioxidants known as polyphenols, which suppress appetite.

Another way through which pomegranate juice prevents obesity is by improving exercise performance. It is rich in nitrates, which improve blood circulation. Improved blood circulation ensures the body muscles receive adequate oxygen required during workouts. This enhances endurance, leading to efficient fat burning. The results are lean and healthy muscles. 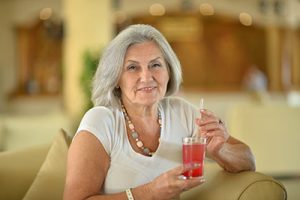 Pomegranate juice has the ability to slow the progression of prostate cancer and breast cancer in men and women respectively. A research done at the University of California confirmed that this juice contains compounds that prevent prostate cancer cells from spreading to healthy tissues of the body. The compounds include hydro-benzoic acids, flavones, conjugated fatty acids, and phenylpropanoids, and they work by preventing prostate cancer metastasis.

Although cognitive abilities decline naturally with age, an old person can improve his or her memory by adopting a healthy diet plan that contains pomegranate juice. Polyphenols found in pomegranate juice have the ability to boost memory.