You are here: Home / Menopause / Cognitive Behavioral Therapy: A New Approach to Menopause and Aging

Some healthcare professionals opine that an approach known as cognitive behavioral therapy could prove beneficial to women coping with menopause, as well as to both men and women dealing with aging.

What Is Cognitive Behavioral Therapy?

Cognitive behavioral therapy, abbreviated CBT, is a psychological treatment protocol in which mental health professionals work in tandem with patients to help them identify solutions to problems created by negative emotions and behaviors.

How Does CBT Work?

Typically, CBT is performed inside the office of a psychologist or qualified mental health counselor. During a therapy session, through discussion, the professional helps a patient identify patterns of negative thinking and the actions that result from such thoughts. Once the negative thoughts and actions are pinpointed, both the professional and the patient then strive to formulate constructive methods of addressing these issues.

The practice has enjoyed a modicum of success in helping people stricken with a variety of physical and mental health maladies either overcome their problems or experience an improvement in the resulting physical and emotional manifestations. Specific ailments include depression, anxiety disorders, post-traumatic stress disorder (PTSD), substance abuse, insomnia, and sexual performance difficulties. That said, in recent times, CBT has also been employed to address menopause and aid older individuals cope with growing older. 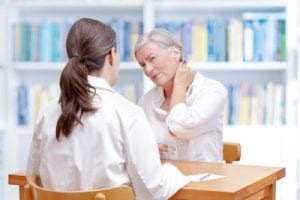 A 2012 study conducted by researchers representing the Journal of the North American Menopause Society measured how effective CBT was in combating common physical symptoms of menopause, such as hot flashes and night sweats. Scientists identified roughly 150 women experiencing the manifestations at least 10 times per week over at least a month’s time.

The subjects participated in intensive CBT sessions, and the examiners measured their mental health and incidence of symptoms six weeks and 26 weeks after the study commenced. The organizers discovered that CBT produced significant improvement in the incidence of night sweats. Additionally, the subjects noticed improved states of mental clarity and emotional well-being.

Certain members of the mental health community suggest that growing older and the potential health and physical changes that come along with the process do not necessarily contribute to mental health deterioration in senior citizens. Rather, the professionals believe such emotional and mental alterations are caused by social changes such as: retirement, moving away from their children and grandchildren and the potential loss of their spouses and life-long friends.

Doctors and clinical researchers who share this opinion also claim that mental health issues in older individuals are often diagnosed as mental or physical illnesses though such conclusions are not always accurate. The professionals are confident that CBT sessions may offer a more effective form of treatment because such practice allows seniors to voice their feelings and identify the underlying reasons without being subject to unnecessary treatments that could potentially exacerbate their circumstances.