You are here: Home / Menopause / Ease Menopause Symptoms with Music 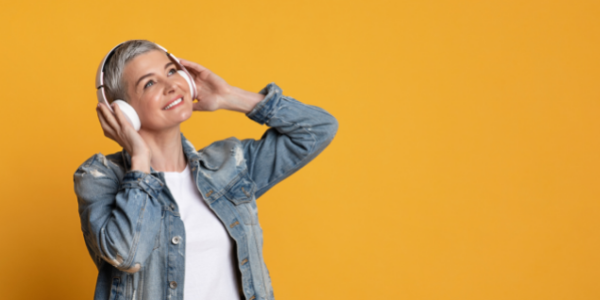 Oh, the miseries of menopause. Hot flashes. Night sweats. Irritability, to name just a few. But a new study by two Turkish researchers shows that music can ease menopause symptoms.

The study was published in the Jan. 24, 2022 issue of Menopause, the Journal of the North American Menopause Society. Researchers Derya Yüksel Koçak, Ph.D. and Yeliz Varışoğlu, Ph.D. divided 48 postmenopausal women, ages 40-65, into control and music therapy groups. None of the women had had a period for at least a year.

How Music Can Ease Menopause

Using music to help patients heal isn’t new to the medical world. If it’s music we like, it relaxes us. And it helps the brain release the “feel good” chemicals, dopamine, oxytocin, endorphin and serotonin. It also helps the brain produce neurons.

For Parkinson’s disease patients, music can help motor activity by activating parts of the brain that haven’t been affected by the disease.

Music therapists use it to calm patients in the days leading up to an invasive or frightening medical procedure. And doctors use music as part of the treatment for asthma, epilepsy, autism, stroke, depression and Alzheimer’s disease. Now maybe we can add menopause to the list.

What Causes the Misery of Menopause? 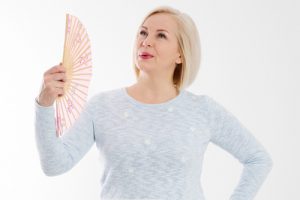 Every year in the U.S., about 1.3 million women go into menopause. That means they haven’t had a period for 12 consecutive months.

Forget the image of the old lady with white hair walking with a cane, though. For most women, menopause begins around age 51. But perimenopause, or your body beginning to change, starts much earlier than that.

Women in their late 30s are coming up on perimenopause now. They may already be experiencing some of the symptoms, like shockingly heavy periods, hot flashes, night sweats and mood swings. It’s perimenopause that causes the unpleasant symptoms. And they don’t go away quickly. For some women, they can last as long as 10 years.

Women have between 6-8 million eggs before they’re even born, and they will never have that many again. As we grow up and grow older, egg cells gradually degenerate and die. They’re never replaced.

When a girl reaches puberty, a new group of eggs is selected every day to begin developing. During her peak productive years, about 1,000 eggs a month will leave the waiting pool and start to develop. Just about one-tenth of those eggs will enter the menstrual cycle, and usually, just one develops fully and is ovulated.

Most women run out of eggs and start menopause around age 52. As the supply of mature eggs decreases in our 30s, our bodies produce less and less progesterone and estrogen. It’s the big drop in estrogen that causes most of the symptoms of menopause.

Keeping Your Cool During Hot Flashes

Hot flashes and night sweats might be the most discussed and the most disruptive of all the menopause symptoms. The doctors at Johns Hopkins Medicine have these suggestions for keeping them at bay or under control:

And then there’s music. It doesn’t matter which genre you listen to. Go to a quiet place and listen for 15 minutes a day. Chances are, you’ll feel better.

Endometriosis and Early Menopause: Is There a Link?
Red Clover as an Herbal Treatment for Hot Flashes