You are here: Home / Healthy Aging / Elderly Onset Celiac Disease: What to Know

Celiac disease (CD) is an autoimmune disorder evolving from the ingestion of gluten leading to inflammation and damage to the small intestines. Mayo Clinic reported that the median age for individuals diagnosed with this condition was just under 50 with one-third of new patients over 65 years of age.

Gluten Intolerance has Many Names


There is no cure. There are, however, certain medical treatments and lifestyle therapies to help control the disorder. Preventative diets must be free of wheat, rye and barley. For example you would avoid foods like bread, beer, and pasta.

Over two million Americans are at risk for CD-related long-term health complications. Other names for CD include celiac sprue, non-tropical sprue and gluten-sensitive enteropathy.

CD can happen at any age. Although the disorder was thought to be related to childhood ailments, the number of elderly individuals diagnosed is increasing when they complain of gastrointestinal problems.

Studies reveal that those with CD have difficulty processing the gluten protein, causing inflammation of the small intestinal walls. Doctors confirm that this leads to interfering with the body’s ability to absorb necessary nutrients, possibly resulting in malnutrition and other health problems.

Genetics may play a role, especially with first-degree gene carried by parents, siblings, and children. Some genes variations are known to increase the risks, while other genes may lay dormant. What triggers the gene to become active is still unknown. Based on the variables, genetics isn’t the sole source of being diagnosed with CD. 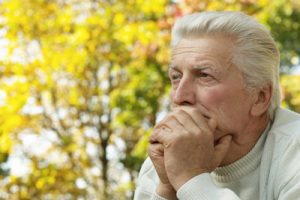 Seniors diagnosed with type 1 diabetes share a higher risk of being diagnosed with CD later in life. A major concern for seniors with CD is the lack of nutrients leading to malnourishment, which can accelerate bone density loss and prompt neurological diseases.

As men and women age, bone density loss increases naturally, advancing the development of fragile bones that are susceptible to injury. The absence of certain nutrients for elderly patients worsens the bone deterioration, affecting mobility, independence, and quality of life.

Neurological diseases associated with CD include epilepsy, ataxia, and neuropathy. Each disorder occurs due to the malabsorption and therefore deficiencies of vitamin and trace elements necessary to maintain proper cell metabolism and healthy immune system functions.

Research and studies have not identified an exact cause of CD, but medical practices do recognize the symptoms in the elderly linked to the immune system.

Our natural aging process along with CD as an underlying cause can hasten the immune system failing to detect defective cells, and it begins to attack and destroy healthy body tissues. This type of conflict is referred to as an autoimmune disorder.

Many health issues can instigate the development of an autoimmune disorder. Like CD, when intestinal (gut) damage happens, it allows unprocessed food, toxins and harmful bacteria to enter the bloodstream. Additionally, certain long-term lifestyle choices can interfere with later-life body functions:

CD isn’t easy to diagnosis. In some cases, the warnings are silent or share similar reactions with more common ailments. For example, ingesting bread crumbs with an extreme sensitivity to gluten can provoke a CD response. Occasionally, it’s mistaken for an allergy to gluten.

For many, the symptoms have to do with the digestive system. Others experience the effect of the disease in other body functions. Talk with a medical professional if these symptoms last longer than seven days.

Additional symptoms related to CD but not necessarily the cause of the disorder are:

Blood tests are ordered to screen for particular auto-antibodies in the blood. The balance of auto-bodies informs the physician of the condition’s severity.

Testing is not always accurate since individuals respond differently. A doctor may schedule more than one type of antibody test or take a biopsy of the small intestine to diagnose CD. Diagnosis includes an assessment to determine the effectiveness of a gluten-free diet along with ongoing monitoring of the condition.

If you have a health condition linked to CD, learn more about the disease.

The Holistic Benefits of “Cat’s Whiskers”
Are Memory Issues a Result of MS Symptoms, Aging or Something Else?