You are here: Home / Menopause / Fish and Legume Consumption Tied to Later Start to Menopause

Menopause typically occurs in a woman’s life around 50 years of age. Natural menstrual periods are permanently stopped for 12 consecutive months, which is a process that could take several years to complete. Often, this period is marked with intense headaches, stomach aches and the infamous hot flashes, and all of these symptoms are evidence that the level of hormones is decreasing.

In recent years, natural menopause has been happening earlier, with some women experiencing symptoms as early as their 40s. Scientists began to study this, and research revealed that a woman’s intake of vegetables and legumes is directly related to when her menstrual cycle stopped. The reason for this is significant because women continue to produce hormones as long as their menstrual cycles return every month, which promotes better health.

Research shows that adding more vegetables to a woman’s diet prolongs the start of menopause. The study was published in the Journal of Epidemiology and Community Health and proves that with a healthy diet, menopause could be postponed up to a year or more. The study of almost 1,000 women from ages 40 to 65 was an observational one, which means their diets and reactions were studied.

Those who added more vegetables and beans to their diets postponed the onset for one to three years, and those who ate oily fish, such a salmon, in addition could postpone it up to three years! This is exciting news because it reinforces the fact that a nutritious, natural diet of whole foods is the best for your health and well-being, which is an excellent reason to eat more natural foods.

Vegetables for a Healthy Lifestyle 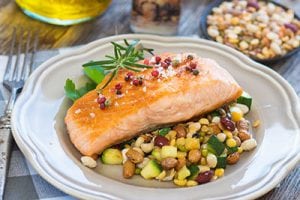 Vegetables are power-packed because they are filled with vitamins, minerals and flavonoids. Vegetables come in a variety of colors, and each color adds different nutrients to support your system. Most nutritionists suggest eating a rainbow of colors of vegetables in order to consume the greatest variety of nutrients.

Mothers have been telling their children to “eat all your vegetables” for centuries. Grandmothers knew, though probably not as much as scientists do today, that meat, fruit and vegetables are known to be beneficial for the body, while cookies, cakes and candy filled with sugar are not nutritious whatsoever. Another British study confirmed that a diet consisting of meat, fish and vegetables could add several years to the beginning of the end of the menstrual cycles depending on the individual’s body composition.

Vegetarians and vegans tend to eat more pasta and rice, and even though these groups of people generally have higher levels of antioxidants, they also have lower levels of fiber, fat and protein. Those who had diets centered around pasta and rice experienced earlier onsets of up to 1 1/2 years. Pasta and rice are carbohydrates that boost insulin resistance and estrogen levels while depleting egg production, so this explains why vegetables and fish extend the onset.

Both studies indicate that women who experience menopause at earlier ages are at  greater risk for osteoporosis and heart disease, but going through the process later can also provide a risk for breast, womb and ovarian cancers. Eating a diet of natural, whole foods while letting nature take its course appears to be the best advice for women approaching this age group.