You are here: Home / Healthy Aging / Gene Linked to Increased Cellular Aging in Those With PTSD

Scientific researchers have found that a genetic flaw might be linked to cellular aging in persons stricken with post-traumatic stress disorder (PTSD). A study about individuals stricken with post-traumatic stress disorder might be at an increased risk of premature aging and suggest potential treatment or preventive methods affected persons might employ to slow the aging process or alleviate associated symptoms.

Post-traumatic stress disorder is a mental illness that strikes what researchers estimate to be as many as 3.5 percent of the adult population in the United States during their lifetimes. This psychiatric malady occurs in the wake of an afflicted person’s involvement in physically, mentally, or emotionally trying events including being a combat soldier, a victim of kidnapping, physical, sexual, mental or emotional abuse or experiencing a terrorist attack.

Those stricken with the disorder often experience a wide array of mental manifestations such as flashbacks (during which they relive the events in question in their mind), avoidance of persons, places and events that might trigger a flashback, the feeling of negative emotions like mistrust of others, sadness, anger and fear and potentially detrimental behavior like violent outbursts.

Should the disorder progress without diagnosis and treatment, an afflicted individual might be unable to perform routine functions, require close monitoring or continual care or be forced to reside in an institution.

The Connection Between Stress and Aging 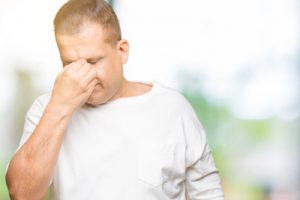 At any age, repetitive bouts of physical, mental, and emotional stress can take their toll. However, as individuals grow older, their natural defenses against stress become weaker, thus rendering them more susceptible to the potentially detrimental health impacts of the condition.

When someone experiences stress, the body releases stress hormones, such as adrenaline and cortisol. Initially, the chemicals help the body cope with the tense situation it finds itself in. However, over time, these chemicals place increased tension on systemic cells that could eventually precipitate injury and illness to bodily regions such as the cardiovascular, digestive, endocrine, respiratory and central nervous systems. Moreover, accelerated aging could result in aesthetically unpleasing conditions like wrinkles and skin disorders that can make a person appear significantly older than he or she is.

A Study Connecting Post-Traumatic Stress and a Genetic Issue

Researchers representing the Boston University School of Medicine have discovered that a genetic mutation might exacerbate the aging process in persons diagnosed with post-traumatic stress disorder. These scientists have identified the Klotho gene as the culprit in accelerated aging in individuals stricken with stress and various sleeping disorders.

The examiners studied more than 300 veterans who engaged in the recent Iraq and Afghanistan conflicts. After conducting significant blood, metabolic, and neurological and psychological testing on each subject, the medical professionals concluded that those who possessed a specific variant of the Klotho gene had particularly severe cases of post-traumatic stress.

One of the study’s participants and authors suggested that this conclusion could eventually lead to the Klotho gene’s soon being isolated and utilized for diagnostic and remedial purposes in addressing stress and age-related bodily issues. Additionally, the researchers opine that their findings may contribute to research regarding methods of slowing age progression.

Eliminating or curtailing the impacts of stress is important for everyone, especially those diagnosed with post-traumatic stress disorder. Practicing the following steps might prevent premature aging or any other stress-related ailments: