You are here: Home / Healthy Aging / Understanding When Your Hormones Are Aging Too Fast

It is possible for an individual’s hormones to age at a far too accelerated pace. Fortunately, there are helpful countermeasures.

As both men and women grow older, their bodies produce and secrete diminished concentrations of these vital chemicals created to enhance sexual and reproductive function, growth and other pertinent systemic functions.

By age 40, men experience a gradual decline in testosterone (the chief male sexual hormone). Women who reach the late forth or early fifth decade experience a natural life stage referred to as menopause. During this phase, the body’s reproductive system ceases production of critical sexual and reproductive hormones like estrogen and progesterone.

Decreased hormonal production could precipitate a variety of unpleasant symptoms and could stimulate the aging process.

Causes of the Premature Aging of Hormones

Scientists opine that, as individuals age, concentrations of what is classified as “bad hormones” (such as cortisol) rise while good hormonal chemicals—testosterone, estrogen, human growth hormone (HGH) and melatonin—steadily decrease. The buildup of a substance like cortisol (commonly nicknamed the stress hormone) can precipitate a host of stress reactions on the body that cause a variety of symptoms (some of which could be dangerous, like high blood pressure and heart disease) and stimulate the overall aging process.

Also called “male menopause,” this condition occurs when a male’s reproductive organs produce lesser amounts of testosterone and other important male reproductive chemicals. In some instances, medical professionals opine that there is no known cause for such an occurrence. However, in other cases, andropause may be precipitated by numerous underlying health issues.

Continual exposure to toxins such as air pollutants and other environmental chemicals can wreak havoc within the endocrine system (bodily tract that regulates hormonal production). Many individuals become exposed to these potentially harmful substances at a younger age, which could render them susceptible to effects such as illness and premature aging.

When the body’s hormonal concentrations are aging at too rapid a pace, individuals might experience certain warning signs such as unusual fatigue, memory loss or other noticeable decline in cognitive function, diminished libido (sex drive), mood fluctuations, episodes of anxiety and possibly depression, wild mood swings, and skin maladies. 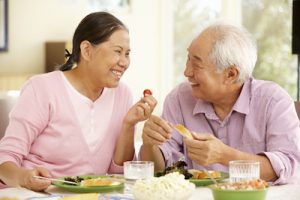 Eating healthier, more nutritious foods could ebb the tide of premature hormonal aging. Physicians and nutritionists particularly recommend an increased consumption of products high in protein and healthy fats. Additionally, these healthcare professionals also suggest increasing one’s intake of vitamins (particularly B and D complexes) and minerals such as zinc.

Sleep is vital to maintaining a healthy hormonal balance. During these periods of rest, the body can slow down and regenerate. Moreover, hormonal regulation reaches a peak during sleep.

Dehydration can precipitate numerous systemic problems including the damage and destruction of various systemic cells. Cellular destruction can result in premature aging.

It may be impossible to completely avoid exposure to potentially harmful substances. That said, when individuals can identify specific toxins they know they are exposed to, health professionals recommend employing strategies to avoid these substances.