You are here: Home / Hormones / Hormonal Changes May Be to Blame for Hernias

Age-related hormonal fluctuations might be responsible for precipitating a medical condition known as hernias. According to research, aromatase inhibitors could be helpful in balancing hormone levels and preventing hernias.

A hernia is a relatively common ailment that can impact both men and women. The malady occurs when an internal organ protrudes through surrounding muscle. In many instances, the organs involved are situated in the digestive tract, such as the stomach or intestines. There are many specific hernia types. However, the most commonly diagnosed types are inguinal, hiatal, umbilical, and femoral.

In the early stages and sometimes even in advanced cases, no physical manifestations are present. When symptoms do appear, they could include a lump, bulge, or swelling in the stricken individual’s groin or abdomen, pain in the impacted bodily region (which might intensify when the person engages in any activity that requires exertion of the groin or abdominal muscles), various digestive issues (indigestion and heartburn) or a sense of heaviness in the impacted areas.

The cause often depends upon the specific categorization. Physicians and medical researchers opine that the hiatal manifestations might be precipitated by a weakened abdomen or diaphragm.

Presentations of the umbilical, inguinal and femoral classifications have been linked to birth defects or muscular straining precipitated by issues including obesity, excessive exercise, pregnancy or straining brought on by constipation. 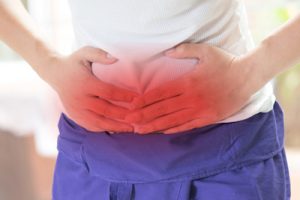 Recent research suggests that age-related hormonal changes might also precipitate the onset of hernia-related conditions. The production and secretion of numerous sexual and reproductive hormones, such as testosterone and estrogen, naturally decline as both men and women age. However, a percentage of the testosterone that aging men do produce can be converted to estrogen.

Scientists representing Chicago’s Northwestern University Medical School hypothesize that this phenomenon precipitates a steady and gradual weakening of an impacted individual’s abdominal wall, possibly resulting in some form of hernia. These same scientists tested their theory on laboratory mice and discovered that male rodents exposed to increased systemic concentrations of estrogen experienced a greater occurrence of hernia.

Furthermore, the researchers also concluded that drugs known as aromatase inhibitors were successfully employed to reduce estrogen levels in the impacted subjects. One of the lead researchers stated that this hypothesis could apply to human cases and that aromatase inhibitors may soon be a viable option to treat men with hormonal imbalances, as well as to potentially strengthen weakened abdominal regions.

The preceding research offers promising new methods to eventually reduce the incidence of hernias. However, healthcare professionals suggest there are certain preventive measures people can employ that might keep the condition’s onset at bay, including the following:

Aging individuals, as well as those with an increased risk of developing a hernia, should pay close attention to their hormonal levels and take the necessary steps to stabilize any imbalances.

Doctors and fitness experts suggest engaging in light exercise designed toward strengthening the groin and abdominal muscles such as sit-ups, jogging or running. However, activities like weight training or sports that require significant jumping could increase one’s risk of becoming stricken with a hernia.

Most people, especially aging individuals, are advised to refrain from attempting to lift heavy objects. Partaking in such activity could precipitate acute abdominal tears or groin injuries that could graduate to hernias.

Fiber, which is found in foods such as fruits and vegetables, in addition to a variety of grain products, is said to help regulate the bowels. This can prevent constipation, which is one of the contributing factors in hernias.

Smoking often precipitates the onset of coughing. Coughing may cause an individual to place undue pressure on his or her abdominal region, which might ultimately elicit the development of a hernia.

Fighting Depression With Probiotics
Diabetes and Its Effect on Aging Hormones