You are here: Home / Hormones / How Ibuprofen Impacts Male Hormones

Research has found that the repeated use of Ibuprofen may provoke hormonal imbalances in men, something that should raise concern for men of older age.

Physicians and pharmacists categorize this commonly used and prescribed medication as a Nonsteroidal Anti-Inflammatory drug (NSAID). This means that the substance inhibits inflammatory agents from collecting inside the body, precipitating inflammation and eliciting a host of potential manifestations and/or illnesses.

Over-the-counter preparations of this drug are available to the general public at supermarkets and pharmacies under well-known and often advertised name brands. However, in certain instances, such as when higher dosages are indicated to treat a specific condition, use of the preparation might require a doctor’s prescription.

What Conditions Does This Drug Treat?

The medication, ibuprofen, is typically indicated for the relief of pain precipitated by various causes. Headaches, backaches and tooth pain are among the most common reasons this product is used. However, the substance is also often ingested to ebb the discomfort of arthritis and menstrual cramps.

Short-term use of ibuprofen may produce mild side effects including digestive difficulties, skin irritation and ringing in the ears (tinnitus). That said, long-term, chronic use and/or ingestion of the substance at higher than normal dosages might provoke more serious health consequences such as the increased risk of suffering a fatal heart attack or stroke, excessive bleeding in the digestive tract and/or intestinal damage. In addition to the aforementioned medical concerns, scientific researchers have also recently found evidence suggesting the repeated use of Ibuprofen might precipitate hormonal imbalances in men.

How Ibuprofen Impacts a Man’s Hormones 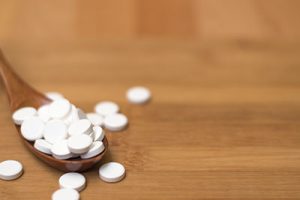 Researchers who conducted a study on behalf of the Proceedings of the National Academy of Sciences concluded that ingestion of the painkiller by otherwise young men in fairly good health may elicit a testicular condition known to cause hormonal disturbances and, quite possibly, infertility.

The study was performed on more than 30 French and Danish men under age 35. Half of the test subjects were administered 1,200-milligrams of the painkiller over a duration lasting a month-and-a-half. The remaining subjects ingested a placebo. A 1,200-milligram dosage is considered high for the average individual, but normal for athletes who are often prescribed much higher dosages by their physicians.

A mere two weeks into the project, researchers noticed the bodily concentrations of testosterone in the men ingesting the painkiller had dropped significantly, resulting in a condition medically referred to as hypogonadism, in which the testicles fail to produce sufficient quantities of testosterone.

How This Impacts Men as They Age

In most instances, hypogonadism strikes men in middle age, typically in the early forties. However, the manifestations associated with diminished testosterone such as weight gain, low libido, muscle and bone weakness can be bothersome and potentially health-threatening. In addition, the increased risk of infertility can be frustrating and yield significant psychological consequences.

Should men stop taking ibuprofen to alleviate common aches and pains every now and then? Most doctors say no. The scientific community wishes to conduct more research before reaching any definitive conclusions. However, physicians advise male patients to take this information to heart, be cognizant of the medications they ingest and avoid overuse and/or abuse of such substances.

Just for Fun: What Your Music Preferences Say About Your Testosterone Levels
Testosterone Replacement Therapy: A Potential Cause of Blood Clots