You are here: Home / Menopause / Managing Menopause with Endometriosis

Menopause is the introduction of an entirely new chapter of womanhood. Perimenopause (the menopausal transition) often begins within the last few years of menstruation and is characterized by drastic changes and irregularities in the womanly cycles, but menopause itself doesn’t actually occur until one year after the final menstrual cycle. It usually shows its inevitable face between the ages of 45 and 55, though this may vary from person to person.

As we leave behind the issues of childbearing age, a new set of obstacles are often around the corner. While some women may experience no negative menopausal side effects, others may have complaints of hot flashes, weight gain, thinning of the hair, issues with sleeping, loss of breast tissue and an array of other issues (most of which will persist post-menopause). For the millions of women who suffer from endometriosis, this period of time may prove to be an even more pivotal point in their lives.

What Effect Does Endometriosis Have On Menopause?

Anyone who has noticeable signs of endometriosis can agree that the condition is painful. Endometriosis occurs when the tissue that is meant to cover the uterine lining grows outside of the pelvis and in other areas of the body instead. The growth of this tissue can cause crippling pain in the abdomen and lower back area, making menstrual cycles more intense. Inflammation, the development of scar tissue in the surrounding areas and issues surrounding fertility may also accompany endometriosis.

While there is no cure for this condition presently, fortunately, the symptoms of endometriosis usually disappear at the onset of menopause. However, this is not always the case. In the absence of menstrual cycles, legions within the endometrial tissue will not continue to grow but there may still be pain lingering from the existing wounds until they are healed or corrected via surgical procedure. 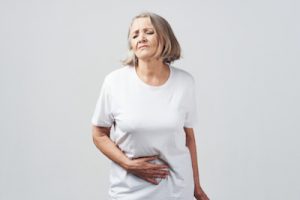 As a way to ease or ultimately end the uncomfortable menopausal side effects, doctors often suggest that women undergo hormone replacement therapy. This treatment replaces the estrogen that has declined during the menopausal transition, leading to the alleviation of harsh symptoms like hot flashes, vaginal dryness, and mood swings. While hormone replacement therapy may seem ideal in normal cases, estrogen triggers endometriosis. So, adding the hormone back into the body may worsen the conditions for those with endometriosis and one may begin to feel the same harsh symptoms that were experienced during menstruation periods.

How to Manage Endometriosis During and After This Transition

If endometriosis sticks around beyond the childbearing period, it is far too advanced and will likely have to be treated surgically to alleviate the pain that lingers as a result of pelvic adhesions. The longer treatment is delayed, the greater the chance of more severe damage. A hysterectomy in part or full may be recommended to restore order within your body.

For those who are against surgical repair, there are other ways to manage the condition. A physician may prescribe antidepressants and other medications to alleviate symptoms such as hot flashes and mood swings. Other methods to minimize symptoms include certain lifestyle regimens. Meditation coupled with yoga or other physical activity will bring about improvements. Getting enough rest and incorporating more healthy fats, whole grains, fruits and vegetables into the diet will also better control endometriosis during the menopausal period.