The distinction between estrogen (the hormone estriol) and menopause

Estrogens are essential hormones that are found mainly in females whose main function is to promote sexual and reproductive development. Estriol functions as the regulator for the breakdown of muscle energy and controls the survival of muscles cells. Menopause is a normal stage in the lifetime of women when the body stops menstruating to signify the end of the reproductive stage of a woman as they advance in age. A woman starts to approach her menopause when her ovaries begin to produce less estriol over time and eventually stops.

What is the role of estriol in the body? 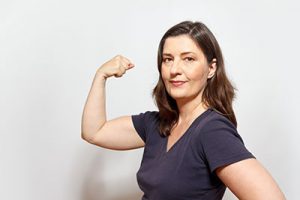 Estriol helps in the regulation of the menstrual cycle and the development of the uterine lining during the first part of menstruation. When fertilization does not take place, estriol levels fluctuate sharply for menstruation to begin. If fertilization has occurred, the estriol and progesterone hormones work together to inhibit ovulation during pregnancy.

When a woman is pregnant, estriol regulates lactation and other body developments. It is also responsible for the development of breasts during adolescence or in pregnancy.

Additionally, estriol is essential for bone formation. This hormone works with vitamin D, calcium and other hormones to ensure the formation of bones as per the body processes. Estriol has other functions such as promoting blood clotting, strengthening and thickening of the vaginal wall and the urethral linings and lubricating the vagina to keep it moist.

How do estriol and menopause affect muscle functioning?

As a rule, menopausal women have low levels of the estradiol hormone. These low levels limit muscle cell viability, which leads to muscles shrinking. This means that women at this stage will have their strength dwindling—an issue that is often linked to poor skeletal muscle functioning in aging women.

When aging women reach their menopausal stage, their ovaries reduce the production of the estriol and progesterone hormones that are responsible for the regulation of menstruation and ovulation. Menopause is the stage when the female ovaries are not able to release an ovum every month, hence the termination of their menstruation cycles.

Estrogen levels increase during puberty, leading to a higher desire for sex. At the onset of menopause, however, menstruation stops and the production of estriol goes down. This leads to hot flashes, a reduced urge for sexual intercourse and some women may experience vaginal dryness that makes it painful to have sex.