You are here: Home / Menopause / Menopause Associated with High Frequency Headaches in Women with Migraine Prevalence

Women prone to migraine headaches may be more likely to experience frequent headaches during perimenopause and menopause.

The results of a study connecting a history of migraines to increased headache frequency in perimenopausal and menopausal women determine that the conditions known as perimenopause and menopause might precipitate a greater occurrence of headaches in stricken women. Despite the findings, there are measures that affected women can employ to either prevent or alleviate the occurrence of headaches and migraines.

A Look at Perimenopause and Menopause

Perimenopause is the period in a woman’s life when her ovaries begin producing diminished quantities of estrogen, the primary female reproductive and sexual hormone, and other key hormones. Eventually, perimenopause transitions into full-fledged menopause in which a woman’s body ceases production of all reproductive and sexual hormones precipitating an end to her experiencing menstrual cycles and to her ability to become pregnant.

Both of these naturally occurring medical conditions elicit manifestations. One such symptom can be headaches. Perimenopausal and menopausal women may experience headaches for different reasons. In certain instances, headaches are the result of estrogen imbalances. However, the occurrence of headaches may also be the result of other factors such as diet, stress, the presence of other health conditions and lifestyle choices such as smoking and drinking.

The Connection to Migraine Headaches 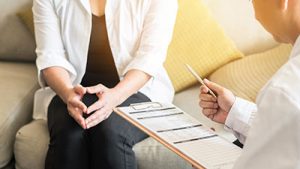 Migraine headaches produce severe, sometimes disabling head pain that is often caused by changes in the brain’s blood vessels. Manifestations may include significant discomfort, dizziness, nausea and sensitivity to light. On certain occasions, the pain could be so severe, the stricken individual must lie down and remain motionless for extended durations. These debilitating headaches typically impact women more than men.

A study completed in early 2016, that was conducted by researchers representing various medical institutions across the United States, examined more than 3,600 women with an average age of 46. Scientists found that a high percentage of these subjects in the midst of the perimenopause stage experienced headaches, especially migraines, at a higher rate of incidence than women not considered to be perimenopausal or menopausal.

Just as a decline in bodily production of estrogen and other hormones might trigger the typical manifestations of headaches, perimenopause and menopause have been known to elicit migraine conditions in women as well. This can also be true in women who have had no previous history of frequent headaches or in those who were not prone to migraines. However, women with a history of migraines might experience more severe manifestations of the condition once they enter perimenopause or menopause.

Replenishing estrogen and possibly other hormones gradually lost during the transition from perimenopause to menopause might possibly prevent or curtail the appearance of migraines or less severe forms of headache. Typically, replacement therapy is administered through oral preparations or skin patches. It is important to note, however, that this type of treatment comes with certain health risks, some of which have the potential to be serious.

For less severe headaches, over-the-counter painkillers or aspirin may provide relief. However, migraines might necessitate the use of more powerful drugs that will require a physician’s prescription.

On certain occasions, women may find relief by implementing one or more self-remedies such as adhering to a healthier diet, limiting stress, taking nutritional supplements, receiving massages and the cessation of bad lifestyle habits like smoking and consuming alcohol.

The Role of Dietary Patterns on Fractures, Post Menopause
Acupuncture for Hot Flashes