A recent study has discovered that people age with fewer health problems when they have more omega-3 fatty acids in their system.

The study looked at the number of years people lived without disabilities or significant mental or physical health problems. The researchers observed 2,622 people who were over 74 years old and followed them for over 20 years. About 11 percent of the people tested achieved healthy aging during this study. The people who lived longer, healthier lives had one thing in common. They all had higher levels of fatty acids due to eating seafood regularly.

How Much Omega-3 Is Enough?

According to the U.S. dietary guidelines, adults should consume about eight ounces of seafood per week. This seafood should substitute meat, eggs and poultry in a person’s diet. Some of the suggested sources of foods rich in omega-3 are the following:

One of the reasons these omega fatty acids create a healthier body as people age may have to do with these fatty acids’ ability to regulate inflammation levels, heart rate, and blood pressure and lower the incidence of irregular heartbeats, the amount of fat in the bloodstream, and the levels of artery-clogging plaque in the blood. The studies did not look at taking supplements of the fatty acid, however. 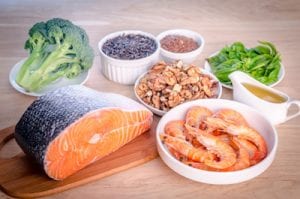 This type of fatty acid has also been shown to help older people avoid dementia and possibly live longer. This study concentrated on the fish products listed earlier, plus walnuts, flaxseed, and supplements, too. Consuming the EPA chemical found in fish also may lengthen the lives of individuals who have high levels of EPA in their systems. This result may have been brought on by the heart health benefits of EPA and fatty acids since older individuals experience more heart disease problems. Also, dementia occurred less frequently in people with high blood levels of EPA. Dementia levels stayed low in people who ate plenty of fish routinely.

For people approaching middle age, eating foods rich in fatty acids and EPAs may reduce or eliminate hot flashes and depression. Fish oils, especially those rich in DHA and EPAs, even improve the signs of depression and affect a child’s behavior and learning, too. Additionally, depression symptoms were reduced in individuals with depressive symptoms when they took cod liver oil or one gram of EPA per day. Also, when women consumed extra EPA, they had a noticeable decrease in the frequency of hot flashes.

A study found that people who took omega supplements for about four months increased the fatty acid levels in their bodies and preserved sections of DNA in their white blood cells. DNA gradually shortens as a result of aging. The DNA of people who improved their omega and fatty acid levels was shortened less than the DNA of those who didn’t increase these levels. Supplements of fatty acids also significantly reduced the quantity of free radicals in the blood. Another discovery from the same study was that fatty acid supplements also lowered inflammation. Supplements with a higher level of EPAs will most likely improve anti-inflammatory properties of the fatty acid supplements.

Aging and Vascular Endothelial Dysfunction: Maintaining a Healthy Heart in Old Age
How “Cleaning Up” Older Cells Can Combat Aging