You are here: Home / Andropause / Age-Related Prostate Issues Men Should Know About

There are specific prostate-related health issues that men should be aware of as they age. Once men hit the age of 40, they are more susceptible to prostatic diseases, but there are steps that you can employ to prevent or alleviate the physical manifestations of these maladies.

Situated between the rectum and bladder, this small organ plays a significant role in men’s reproductive and sexual health. The gland produces and secretes a substance called prostatic fluid, which plays an integral role in ensuring the health of sperm and preserves the genetic code that sperm carries. Healthy sperm is necessary for the insemination process that precipitates pregnancy and the eventual birth of child.

The Impact of Age on Prostatic Health

Optimal glandular health and function is predicated on a normal and steady systemic production and release of sexual and reproductive hormones such as testosterone. As men age, bodily concentrations of these chemicals gradually decline. Such an occurrence can greatly impact prostatic structure and function, which could result in the onset of numerous ailments.

Common age-related maladies include the following: 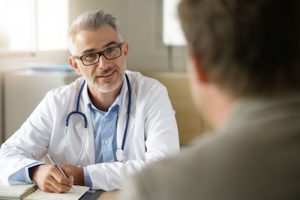 Aging men can improve their prostatic health by displaying vigilance and executing specific lifestyle changes that include the following: