You are here: Home / Healthy Aging / How Melatonin Aids in Anti-Aging 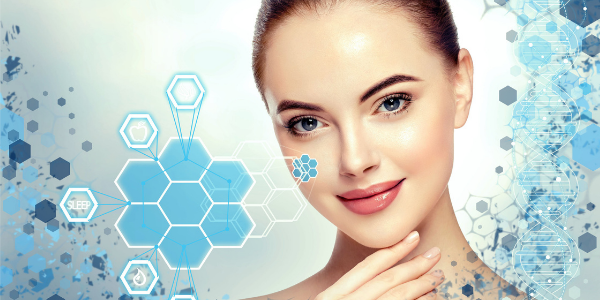 Our body’s circadian rhythm depends on a number of factors for various biological processes to take place. Among them is the natural hormone, melatonin.

While commonly known for helping people sleep, melatonin aids in regulating the sleep-wake cycle in the body to keep our circadian clocks and rhythms in sync. Because of this, melatonin not only helps with our normal sleep and wake cycles but also plays a role in cognition, immunity, aging processes and a number of other aspects of daily health.

Discovered in 1958, melatonin is now one of the most popular natural sleep aids on the market in various formulas, including the most reliable; pulsatile-release. Though popular at bedtime, it is not widely known for its powerful anti-aging and antioxidant properties.

In fact, numerous researchers and scientists, including Rüdiger Hardeland and a team at laboratories Arago in Banyuls-sur-Mer, have found that melatonin can slow down the effects of aging, and that various age-related diseases are actually associated with reductions in melatonin secretion in individuals.

As a rule of thumb, most beings perform crucial cell repair processes while sleeping; melatonin thus serves as a cue to the body to begin repair from the day. Not only does melatonin serve as a cue, it also appears to act as an antioxidant in its own right by binding directly to oxygen and nitrogen radicals, and preventing them from causing damage within the body. Simultaneously, it also stimulates the body to make other antioxidant enzymes.

As a powerful antioxidant, melatonin works to protect cell health by limiting damage from free-radicals and providing essential protection to the brain. As an added bonus, it’s now known that melatonin may also help fight the growth and spread of cancer cells. 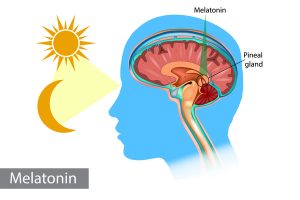 Inside the brain, the pineal gland acts as the primary source of melatonin, and changes to that area of the brain affect the amount of melatonin produced in our bodies. The changes that may occur here coincide with the aging process’s effects as well as risks for neurodegenerative diseases such as Alzheimer’s.

The small, pea-sized gland in the brain’s center produces several different neurochemicals and hormones affecting physiological health and function. Melatonin is the most critical product of the pineal gland, and is released in an initial spike, with a great deal hitting the bloodstream at once when the body perceives that it is time to sleep. After this, melatonin is released at lower levels throughout the night, helping to maintain our sleep cycles. This ensures steady melatonin levels throughout the night until the hormone naturally falls in preparation for awakening. This process becomes incredibly significant when it comes to sleep, aging and brain health.

The body produces and synthesizes melatonin throughout the body, not just in the pineal gland. Other sites of melatonin production in the body include the gastrointestinal tract, bone marrow and skin, just to name a few. This fact may help explain why the hormone is also involved in gut health, skin restoration, immune health, brain cell protection, cardiovascular health and even has fertility and pregnancy benefits.

How melatonin protects brain health and function is no secret in the medical community. Its anti-inflammatory and antioxidant properties work to protect against damage caused by inflammation and oxidative stress. A strong antioxidant, melatonin scavenges the reactive oxygen species (free radicals) which cause oxidative stress, decreasing Malondialdehyde (MDA), a product of lipid peroxidation whose expression is generally used as a marker of lipid peroxidation and oxidative damage and also stimulating the synthesis of antioxidant enzymes.

Amazingly, melatonin provides direct help in preventing the formation of two proteins, tau and beta-amyloid, known to be biological markers of Alzheimer’s disease. Proper melatonin levels in our bodies, maintained over our lifetimes, can help us keep our cognitive function healthy and lower our risk of developing Alzheimer’s and other health issues.

The Effects of Low Melatonin Levels

While we can see that melatonin aids in anti-aging, it is also true that consistently lower levels of melatonin can lead to accelerating biological aging. The fact is, as we age, the natural production of melatonin decreases independently of pineal calcification. Pineal calcification is the build-up of calcium deposits, as occurs in the heart and arteries, but it can also occur in the brain, joints and even muscles. Unfortunately, calcification is more aggressive in the pineal gland than in other parts of the body.

Melatonin production decreases with calcification, and it creates an elevated risk of neurodegenerative disease. This accelerates aging and can cause severe sleep disruptions.

Definitive answers about how and why calcification happens are still in the works. Aside from the few known facts about how calcification contributes to Alzheimer’s and other neurodegenerative diseases, some studies suggest that restorative sleep helps address at least some of the factors associated with an increase in pineal calcification. 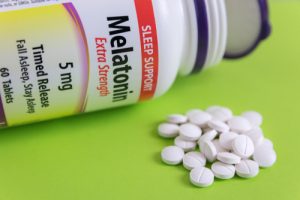 For this reason, it is important to supplement with proper melatonin formulas, like a pulsatile-release formula that mimics the body’s natural production of the hormone, to maintain regular melatonin levels.

Melatonin is inexpensive and plentiful. It doesn’t require a prescription in most places, and you can purchase it in doses ranging from 1mg or higher. While it can be easy to get wrapped up into thinking more is better, the average healthy adult only needs a simple 3mg dosage (similar to the natural amount that is produced by the body), although some doctors suggest 5mg daily for non-sleep-related concerns including anti-aging and other health concerns.

It should also be noted that, unlike other hormones, natural melatonin production is not altered by normal melatonin supplementation. As long as you are supplementing with small to moderate doses of melatonin, the body will continue to produce at its biological levels (which can fluctuate depending on health, age and other factors).

Interestingly, the serotonin hormone, which is produced in our bodies during the day and helps regulate our mood, appetite and memory, is converted to melatonin after sunset when light indications of the circadian rhythm signal that the night cycles should begin. Because of this, some doctors recommend supplementing with melatonin before bedtime and serotonin in the morning to create a natural cycle of hormonal cues when the body begins to age and natural production falls out of sync.