You are here: Home / Healthy Aging / The Anti-Aging Benefits of Walnuts

Walnuts contain key nutrients that have been shown by peer-reviewed studies to have anti-aging benefits, including the maintenance of cognitive function.

Walnuts are much more than a tasty snack. They are also an excellent weapon in the arsenal of super-foods that can combat the onset of cognitive decline and chronic disease. The anti-aging benefits of this edible seed are well founded and manifold. As you get on in years, it is an excellent idea to incorporate walnuts into your everyday diet to keep your mind as sharp as ever and increase your longevity.

While the consumption of walnuts has been found to confer a number of health benefits to aging individuals, it is the slowing of cognitive decline that has attracted the most attention. Elderly people are often subject to diminishing cognitive function as they age, especially if they are lifelong smokers. Studies have shown that at-risk people in the midst of their dotage, including smokers and those with low neurophysiological scores, are aided by making walnuts a regular part of their diet. One study by the American Journal of Clinical Nutrition found that a test group of walnut-eaters fared better in cognitive exams after two years than a control group of non-walnut-eaters, results that would likely be enlarged if the study had been carried out over a longer period of time.

These findings are corroborated by another study from the Journal of Nutrition, Health, and Aging, which attributed better cognitive function to the consumption of walnuts. Those who included the nuts in their diet were found to have better memory, information-processing speed and concentration abilities. 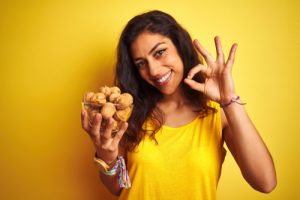 There is significant evidence to conclude that walnuts not only protect the mind from deterioration, but are also instrumental in promoting the healthy aging of the body. The Nurses’ Health Study has determined that women who consume walnuts as a part of their regular diet are more likely to classify as “healthy-agers,” which in turn makes them less susceptible to chronic disease like cancer, Parkinson’s and diabetes.

What Gives Walnuts Their Anti-Aging Benefits?

Research has identified exactly which nutrients in walnuts account for their anti-aging qualities. It seems that it is the B vitamins, antioxidants and n-3 polyunsaturated fatty acids that make walnuts so potent in the fight against cognitive decline. With regards to physical health, alpha-linolenic acids and ellagitannins give walnuts the ability to promote healthy aging.

How Many Walnuts To Eat in a Day

There is no magic number of walnuts to eat every day to guarantee that the anti-aging benefits have their effect. Of the studies mentioned above, only one accounted for “regular consumption” by asking participants to report on their own dietary norms, while another had participants consume one or two ounces of walnuts or walnut supplements a day. Clearly, there is no need to base your entire diet around this magical nut to enjoy the health benefits described above. It is daily consumption of a small portion of walnuts that will bestow the cognitive and corporal advantages on the consumer.

Walnut Consumption Not Just for the Elderly

While eating walnuts is certainly a good idea for elderly people hoping to stave off chronic disease and cognitive decline, it is not only those in the last chapters of their lives who should turn to this super-food. The Nurses’ Health Study focused on middle-aged women whose consumption of walnuts led to healthier aging down the road. This suggests there is no perfect time to start working walnuts into your diet, and it might be a good idea to do so even if old age still seems a long way off.

Healthy living is a complicated and multifaceted process with many interrelated components. While there is no way to live a perfectly healthy life, there are countless small steps an individual can take to promote their well-being. Eating walnuts is one of these steps and a relatively easy one to take. Walnuts are both delicious and inexpensive. Knowing that they are also chock-full of key nutrients with anti-aging benefits, you can make the easy decision to incorporate them into your diet.