Purpose of the Liver

Most people know that the liver performs the crucial function of processing the items that enter the body and ridding the body of the numerous toxins it is exposed to. But that is not its only job. It also performs numerous other activities that are just as critical to a person’s health and well-being. These functions include the production of systemic juices that aid in digestion, the stimulation of the blood clotting process, the synthesis of the nutrients from foods and beverages, the augmentation of the immune system and the regulation of various hormones.

The Impact of Age on Liver Function

As with any organ, the liver is susceptible to the aging process. The livers of older people might experience:

In some cases, an elderly individual’s liver might shrink 20 percent to 40 percent of its maximum size.

Many aging structures weaken as time progresses. The liver is no different, and this weakening may reduce the organ’s ability to perform certain functions or execute with less efficiency than before. Specific functions often impacted include the production and secretion of the vital digestive juice known as bile, as well as the diminished ability to rid the body of various toxins.

Many aging livers experience a decreased blood flow. A decreased supply of blood might inhibit the organ’s capacity to process certain heavy or caustic substances such as prescription medications. Such an occurrence could precipitate greater sensitivity to certain medications and result in the appearance of a greater number of side effects or a more serious severity of these reactions.

Older livers sometimes cause an accumulation of fat cells. These structures can impede the organ’s capacity to properly metabolize fat. Stricken individuals may experience an unwanted accumulation of body fat. In more pronounced instances, obesity could result.

Fortunately, liver function may be maintained or restored by partaking in certain lifestyle habits such as: 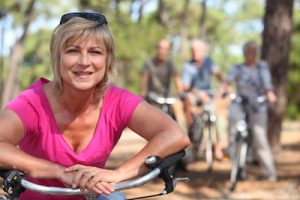 Individuals who exercise on a regular basis stand a better chance of burning excess body fat. However, physical activity is also thought to aid in the liver’s ability to synthesize or eliminate accumulated fat cells.

Individuals are encouraged to eat foods containing nutritious, healthy products containing fiber, antioxidants and pertinent vitamins and minerals. Consumption of such foods prevent the accumulation of toxins in the body and place less strain on the liver. That said, people are strongly advised to avoid foods containing excessive levels of potentially detrimental substances like saturated fats, sugar, salt, chemicals and preservatives.

Appropriate hygiene is crucial to maintaining optimal liver function. Frequent hand washing, bathing and brushing of teeth can prevent any number of microscopic organisms including bacteria and viruses from entering the body and placing added strain on the liver.

Excessive alcohol intake is known to precipitate potentially extensive liver damage. According to the WHO, men should not drink more than 24g of alcohol per day, women not more than 16g. 20 grams of pure alcohol equals one-quarter liter of wine, or half a liter of beer. Additionally, healthcare experts suggest consuming these drinks with large meals to promote easier absorption.

Ingestion of illicit drugs can have as detrimental an impact upon the liver as alcohol can. Moreover, individuals should exercise significant precautions when using certain drugs. Some medications, even a few that are sold over the counter have proven difficult for the liver to synthesize. Prolonged or prodigious usage could eventually lead to liver damage.

Extreme excess weight or obesity can lead to the development of an increased accumulation of fat cells within the liver.

Nicotine and other potentially caustic chemicals contained in tobacco are believed to increase one’s chances of developing cellular changes within the liver that could ultimately precipitate the onset of cancer.