Life begins at 40. This is a favorite saying among women who have finished raising and educating their kids and are now ready to start enjoying life again. The 40s is also a time when hormonal changes begin to knock on your door which causes many women to drink more alcohol than usual. However, it has been said that too much alcohol consumption during this stage can result in a host of health complications. Is this true? Read on to find out.

Menopause is a stage where the woman stops producing eggs and menstruation ceases. It is characterized by the reduction of estrogen and progesterone. As a result of these reduced hormones, women at this stage that goes on for about a year are moody, depressed, forgetful and irritable most of the time. They also experience hot flushes, insomnia, loss of hair, reduced libido and weight gain around the mid-section. To try and deal with all these issues as well as the recently gained freedom from kids, many women find themselves consuming more alcohol than usual. 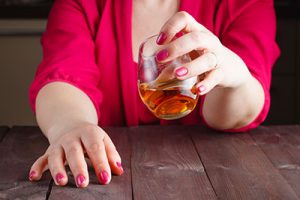 There are two schools of thought when it comes to alcohol consumption and women who are at this stage. Some people claim alcohol is good for the heart, while others condemn the intake of alcohol and associate it with increased cases of cancer, obesity, osteoporosis and even heart diseases. However, there is a middle ground between the two claims as they both agree that a woman should not drink more than one or two glasses of alcohol per day. The National Institute on Alcohol Abuse and Alcoholism defines one drink as one small glass of wine, one can or bottle of beer or one shot of distilled spirits. In fact, most women say that alcohol makes menopausal symptoms such as hot flashes and mood swings even worse.

Conditions Associated with Alcohol During this Stage

Any amount of alcohol increases a woman’s chance of getting breast cancer, and those who have more than two drinks are one-and-a-half times more likely to have cancer than non-drinkers.

This stage already predisposes women to be depressed and experience severe sadness. When alcohol is added to that condition, the level of depression is likely to get worse. Women who show signs of alcoholism are two to seven times more at risk of depression than men.

For women who have found relief of their symptoms after drinking some alcohol, they are likely to depend on it to help them through the phase. Such level of dependency to raise their moods, reduce hot flushes and increase sleep can lead to alcoholism and the woman won’t be able to stop even after that hard year is over.

One drink may be good for the heart, but having more than two glasses of wine, beer or champagen per day puts a woman at the risk of cardiovascular diseases caused or triggered by alcohol. Women who drink a lot also tend to central obesity that can lead to diabetes, heart diseases and stroke.

As women age, their bodies start to retain less and less water which is why they are affected by alcohol more than men of the same age. This loss of water leaves bones prone to osteoporosis and fractures. A woman can also fall when they are drunk even if that has never happened before because there is not enough water to dilute alcohol.

Heavy drinking can lead to problems with vital organs such as the liver, brain and nerves.

How to Deal With the Symptoms

While alcohol is a great temporary solution in relieving menopausal symptoms for many women, alternative methods should be considered. Doctors suggest hormone replacement therapy, medication, exercise, sedation at night and plenty of moisturizers to help with the dry skin. They should also eat a diet rich in fruits and vegetables as well as drink at least 10 glasses of water a day. If drinking alcohol is unavoidable, a woman should not consume more than one or two glasses daily and abstain from alcohol for at least two days a week.