You are here: Home / Healthy Aging / How “Cleaning Up” Older Cells Can Combat Aging

Curing disease has long been a focus of medical research. Recent studies reveal that aging is largely caused by senescent cells, a term for cells that are deteriorating or dormant. Ridding the body of these cells is a new focus of research.

Heart disease, diabetes, some forms of cancer and dementia are more common among senior citizens. As humans grow older, cells slow down their processes and eventually become senescent and stop dividing.

In studying senescent cells to determine what part they play in declining health in later years, scientists at the University of Exeter in the United Kingdom have tried to unlock the secrets of mitochondria. Mitochondria are structures in cells that create energy to maintain cellular functions.

Scientists used blood cell lining (epithelial tissue) in their experimentation. The goal was to splice the mitochondria, which would enable researchers to find out what product a gene would produce.

Two chemicals, SRSF2 and HNRNPD, were created, and they depended on two separate splicing operations. These two proteins had been associated with cellular breakdown in older people due to advancing age.

Lorna Harris, one of the researchers, affirmed that the study’s results demonstrated that the senescent quality of cells progresses with age and inhibits cellular viability.

Ms. Harris was careful to explain that the impetus of these studies was not to simply prolong life itself, but to give people a better quality of life, helping them look younger, feel better, and maintain optimal health longer than had previously been possible. 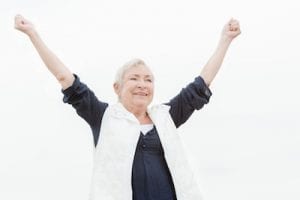 An article by Zoë Corbyn labels senescent cells “zombie cells” and describes observations that demonstrate the effects of these cells on mice’ knees. One mouse was six months old and the other 18 months old.

The older mouse had tiny yellow spots on its knees, while the younger mouse had almost none. The pigmentary changes in the knees of the older mouse occurred due to senescent cells, damaged cells that have ceased dividing as a guard against cancer, but which are still refusing to die. These cells release substances into the bloodstream that accelerate age-related changes in other, healthy cells.

Studies on mice have shown that eliminating just 30 percent of senescent cells made a definite difference in age-related changes. Delay or improvement has been noted in osteoporosis, cardiovascular defects, neurological disorders and frailty. The testing did not demonstrate greater longevity in the mice, but it extended their “health span.” Aging mice that were treated did show some life extension.

The article describes studies by several competing researchers who aim to transfer these fascinating studies from mice to humans. Studies performed by Unity Biotechnology aim to trigger senescent cells to die by zooming in on the biological pathways they ordinarily take to resist dying. By blocking the pathway, researchers hope to bring about cell death.

The researchers look for tiny molecules called senolytics that can spur the death process in senescent cells. These substances are contained in certain drugs. About twelve drugs have been isolated that can eliminate senescent cells. Each is limited to destroy only one or two kinds of cells, so they cannot be released into the entire body.

Nathaniel David, president and co-founder of Unity, explains that the team is in what he calls chapter one of the project. The goal of that chapter is to successfully demonstrate that the elimination of senescent cells in humans can take a previously uncurable or untreatable age-related condition and redefine it as a medically treatable condition.

Building on the success with improving knee-related conditions in mice, a similar study was started in June 2018 with a projected timeline of nine months. Success in this study could lead to widening the research beyond specific conditions to slowing or reversing age-related changes that have been an inevitable part of growing old. The quality of human life, and possibly the length, could make us all winners!