Menopause can wreak havoc on the sleep cycle. For some women, this is due to uncomfortable hot flashes. For others, however, it might be a sign of obstructive sleep apnea.

Hot flashes may be the most common side effect of menopause. Unsurprisingly, when women experience hot flashes at night, it can disturb their sleep. Because the side effects of menopause can interrupt sleep, it’s difficult to distinguish between menopause-related disruptions, like hot flashes and night sweats, and genuine sleep disorders, like sleep apnea or restless leg syndrome.

What is Obstructive Sleep Apnea?

OSA is a sleep disorder caused by throat muscles relaxing and constricting during sleep. When they relax, they can block the passage of air. When the brain notices that the body isn’t getting enough air, it jolts the sleeper awake, resulting in an inadequate sleeping experience. In less severe cases, this blockage can cause snoring. However, OSA can be a serious condition as the blood oxygen deficiencies caused by constricted airways can increase blood pressure levels over time. This can lead to cardiovascular problems, ranging from hypertension to heart attacks.

Can Menopause Cause OSA?

It’s hard to determine whether menopause causes OSA, or whether it just creates a physical environment where sleeping disorders can flourish. There are a few ways in which menopause and OSA are linked. For example, during menopause, the body’s supply of estrogen and progesterone decrease. These hormones are responsible for protecting and promoting healthy muscle tone. When hormone levels diminish, the body is less able to maintain healthy muscle tone in the airway. This makes the airway more prone to collapsing at night, leading to restricted breathing.

What Symptoms are Associated with OSA?

There are many symptoms associated with this type of apnea. They include daytime side effects like sleepiness, headaches, irritability and concentration problems. During the night, people experience sweating, decreased libido, dry mouths and loud snoring. When people wake repeatedly throughout the night and find themselves gasping for air, OSA is the probable cause. Menopausal women should consult with a doctor if they’re experiencing these symptoms on a regular basis.

The Progression of Breathing Disorders 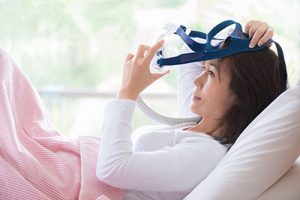 There is a spectrum of nighttime breathing difficulties. On one of the spectrum are the men and women who have no nighttime breathing complications. They don’t snore, and they never wake up due to impaired breathing abilities. On the other side of the spectrum, however, are the men and women who have severe OSA. They snore loudly, and they rarely get an unbroken night of rest. The progression from one side of the spectrum to the other rarely happens all at once, even if sleeping troubles are instigated by the hormonal changes caused by menopause.

Menopausal women often experience upper airway resistance syndrome before experiencing full-blown OSA. This precursor to OSA has similar side effects, like daytime sleepiness and headaches, but it’s not as severe as apnea. If this problem is treated at an early stage, menopausal women may be able to avoid OSA.

OSA in Men and Women

In some cases, menopausal women aren’t diagnosed with OSA because they exhibit slightly different symptoms than men. Men with OSA almost always snore loudly and wake up gasping for air. While many similarly afflicted women also experience these symptoms, others experience more subtle symptoms. They might be more aware of restless legs and feelings of fatigue, and they might not notice any choking sensation. Because of the stress hormones women experience during menopause, they often wake up feeling like they need to use the bathroom rather than that they need more air; this is because the hormones have sent a message to the brain signaling that the bladder is full.

Menopausal women need to be mindful of their sleeping health. If they notice any significant changes in their sleeping patterns, they should discuss their concerns with their doctor. Catching sleep disorders before they progress can have a major impact on quality of life. It helps women get better sleep, and it prevents the cardiovascular conditions associated with restricted nighttime oxygen intake.