You are here: Home / Hormones / Caffeine and Your Hormones

Do you enjoy a daily dose or two of caffeine? Caffeine can have a significant effect on people’s hormones, particularly as they age.

Caffeine is a naturally-occurring substance that is found in numerous plants such as coffee beans, kola nuts, tea leaves, and cacao. These products comprise frequently consumed beverages and foods like coffee, tea, soft drinks, and chocolate. Additionally, the substance is synthetically-produced and placed in commonly used over-the-counter products including pain relieving medications, preparations designed to induce wakefulness and various cold remedies.

The substance is a known stimulant. This means ingestion often precipitates a jolt to many bodily systems, most notably the central nervous and cardiovascular tracts. Those who frequently ingest caffeinated products often rely on this boost to execute simple functions, some as simple as merely waking up in the morning.

However, over time or when ingested in prodigious amounts, caffeine can have potentially negative bodily effects. The substance can produce alarming, potentially dangerous physical manifestations such as high blood pressure, increased urination, rapid heartbeat, digestive problems and mental manifestations including anxiety. Moreover, use of the product can exacerbate any underlying kidney, cardiovascular, digestive or mental issues.

Medical community members opine that chronic consumption of caffeinated products could have a profound effect on the body’s hormonal levels. 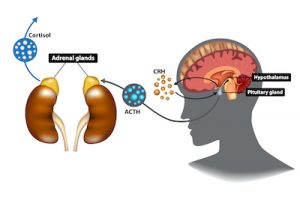 Caffeine ingestion is said to negatively impact an important hormonal system known as the hypothalamic-pituitary-adrenal (HPA) axis. The hypothalamus, pituitary and adrenal glands are integral to the endocrine system, which controls all systemic hormone production.

In particular, the adrenal gland’s balance is upset. Consumption of caffeinated products precipitates the gland’s release of stress hormones like cortisol and adrenaline. These chemicals not only lessen the effectiveness of other critical hormones but can potentially increase blood pressure, heart rate, and anxiety.

A study conducted by the National Institute of Health revealed that moderate caffeine intake raised the estrogen levels of Asian women. However, white women who were tested demonstrated only slight alterations in systemic concentrations of the primary female reproductive hormone.

A research project conducted in the early 2000s concluded that an increased intake of caffeinated beverages can have an adverse effect on the body’s capacity to metabolize the crucial metabolic hormone insulin. Healthy volunteers were placed into groups. One was administered a placebo, while the other was given three milligrams of caffeine per kilogram of body weight. Individuals administered the caffeinated injections experienced a 15 percent greater decrease in insulin sensitivity than those taking the placebo.

It is important to reiterate that studies are still ongoing, and the researchers declared that any firm conclusions cannot be drawn. However, the findings should give individuals pause and inspire them to utilize caffeinated products in moderation.

For many people, especially as they age, continued intake of caffeinated items might exacerbate or introduce any number of hormonal imbalances and other health problems.