You are here: Home / Healthy Aging / Understanding the Gut-Brain Connection 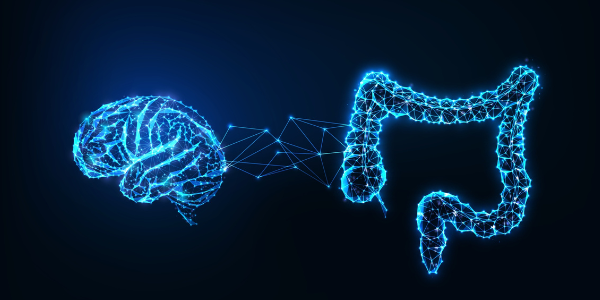 The brain is the body’s primary control center, responsible for coordinating all its activities. But did you know that the gut is considered a “second brain?” The gut-brain connection describes the communication that takes place between the gastrointestinal tract and the central nervous system, and this connection can have a big impact on overall health.

What Is the Gut-Brain Connection?

The gut-brain connection is a complex system that includes the enteric nervous system (ENS), a network of neurons lining the gastrointestinal tract, and the central nervous system (CNS), which consists of the brain and the spinal cord.

The ENS is sometimes called the “little brain” because it can function independently from the CNS. In fact, the ENS has been found to produce more than 30 neurotransmitters, the same type of chemicals that are produced by the brain.

The enteric nervous system can work independently of the brain, meaning that the gut can send signals to the brain and vice versa. This two-way communication is essential for maintaining a healthy balance in the body.

How Does the Gut-Brain Connection Work? 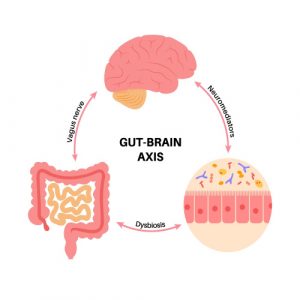 The gut-brain axis works via the nervous system, the hormonal system, and the immune system.

The nervous system sends signals between the brain and the gut. The enteric nervous system is a critical player in this communication, as the network of nerves connects the gut to the brain. This allows the gut to send signals to the brain, and vice versa. The vagus nerve, which runs from the brain to the stomach, plays a role in this communication by relaying messages between the gut and the brain.

The immune system is also involved in the gut-brain connection. The gut is home to 70 percent of the body’s immune cells, and these cells can send signals to the brain to impact mood and behavior. For example, inflammation in the gut has been linked to anxiety and depression. Also, the gut microbiome, the community of bacteria that live in the gut, has been found to directly impact the brain.

Because of the multi-level influences the gut impacts, proper gut health and probiotics, or “good” bacteria, have been found to promote a healthy gut-brain axis.

Impact of the Gut on the Brain and Vice Versa

The gut-brain axis is a two-way street. Not only does the brain influence gut function, but the gut also plays a role in brain function. Because of this interconnectivity, a number of conditions can be influenced by improper balance of this axis and poor gut health. Examples of conditions which can be impacted include the following:

Gastrointestinal disorders such as irritable bowel syndrome (IBS), inflammatory bowel disease (IBD), and celiac disease are all believed to be impacted by the gut-brain axis. These disorders are caused by genetic predisposition, gut microbiota, and the environment. For example, IBS has been linked to various factors, including a change in gut microbiota, a history of abuse or trauma, and a family history of the disorder.

All in all, it’s easy to see how the gut-brain axis is a complex system that is involved in a variety of conditions. This system is responsible for sending signals between the brain and the gut and research is finding more and more proof that it is involved in a variety of conditions including gastrointestinal disorders, mood disorders, and chronic pain. Because the gut has a big impact on the brain and vice versa, it is vital to understand the gut-brain axis to understand these conditions better.