Researchers opine that menopause is better than merely age at pointing to the right time for women to obtain mammograms.

Menopause is considered more of a naturally occurring life event than a health malady. Typically, menopause commences in a woman’s late forties or early fifties and is categorized as the time the reproductive organs cease producing hormones and performing other vital functions. Once the process is complete, the woman in question will no longer experience menstrual cycles and lose the ability to bear children.

Numerous untoward physical and mental manifestations may occur. The symptoms can include but are not necessarily limited to insomnia, mood swings, irritability, night sweats, hot flashes, increased sweating, vaginal dryness and painful intercourse.

Menopause is said to occur in four stages: premenopause, perimenopause, menopause, and post-menopause.

These diagnostic tests are performed to examine the breasts and internal breast tissue for abnormalities such as cancer. The examinee’s breasts are spread out and placed on a flat, firm surface. Once the breasts are in place, a healthcare professional uses an X-ray machine to capture images of the structures. Mammograms are considered a vital tool in breast cancer diagnostics because these tests can detect early-stage cancers developing inside deep breast tissue that cannot be seen or felt. 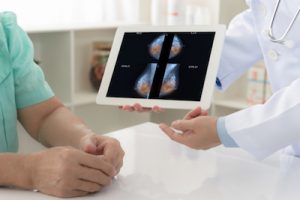 Breast cancer is among the most common malignancies impacting women. The disease can strike at any age and frequently runs in families. Healthcare providers encourage women to undergo regular mammography screenings starting around age 40. For individuals with a family history of the disease, physicians recommend that routine screenings begin much earlier, possibly in the twenties.

Recent research, however, has shown that, for women of menopausal age, the specific stage of the condition might be a better indicator than age for when women should receive a mammogram or other diagnostic tests.

An article that appeared in a 2015 edition of the Journal of the American Medical Association (JAMA) discussed the findings of a breast cancer-related study that lasted from 1996 to 2012. Researchers examined more than 15,000 women between the ages of 40 and 85 who were diagnosed with the disease over this decade-and-a-half long stretch and considered several factors to draw certain conclusions, particularly menopausal status.

The team of scientists also studied post-menopausal women. Statistics showed that the diagnosis of aggressive cancers was equal among individuals who had mammography screenings either every year or every other year.

The study’s organizers cautioned that research is still ongoing and that no firm conclusions can yet be drawn. However, they believe that such statistics mean that menopausal stage could be just as good of an indicator as age, if not better, of when women should seek breast-cancer screening.

Higher Cholesterol Levels a Result of Menopause
Leg Cramps and Menopause: Everything You Need to Know