COPD is a serious lung disease that affects millions of people. Smoking is the chief cause, but exposure to air pollution can also increase one’s risk.

COPD, or chronic obstructive pulmonary disease, is a chronic lung disease that limits airflow in a person’s system. Although it is often considered similar to asthma, another chronic lung disease, it generally mimics a combination of bronchitis and emphysema. For most people, COPD is a severe, life-threatening medical condition.

Unfortunately, COPD is often misdiagnosed as asthma. Some individuals stricken with the disease even shrug it off as simply being out of breath as a normal sign of aging. In reality, however, COPD is a progressive disease that continuously weakens the lungs, making it more difficult to take air in. The condition can also lead to other medical problems, such as heart disease, due to inadequate amounts of oxygen in the blood.

Senior citizens who suffer from COPD often believe their symptoms simply come with age or as a result of smoking, even if they quit a few years earlier. Overall, most go undiagnosed until after they have lost at least half their normal lung function.

In many instances, a person may believe his or her symptoms are due to something specific, such as walking up a steep incline or up a hill too fast. He or she may decide to slow down while walking up there or avoid it altogether. As a result, a COPD attack may seem to stop, and the person may mistakenly think it was just a case of getting winded.

Symptoms of the Disease

COPD causes a number of symptoms that may be shrugged off as being something else. However, it’s important for anyone who experiences any combination of these symptoms to see a doctor. 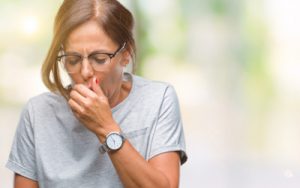 A common COPD symptom is being short of breath while exerting more energy. For instance, walking faster, going uphill or walking up a flight of stairs can cause this issue.

A chronic cough is present in COPD.

More mucus is present due to excessive coughing.

It’s normal to feel fatigued and winded with COPD due to the inability to take air in.

COPD can make it difficult to keep up with normal daily tasks as it can result in exhaustion.

COPD commonly results in wheezing and tightness in the chest in more severe cases.

Being or having been a smoker for many years is one of the biggest risk factors for developing COPD. However, there has been research that establishes that another huge COPD risk factor is exposure to air pollution, especially while people are in their own homes. UK Biobank, a study that examined over 300,000 individuals between the ages of 40 and 69, studied the effects of long-term pollution exposure in relation to COPD.

The study participants were exposed to various types of pollution in their homes, including pollution caused by vehicle exhaust, power plants, fossil fuels and industrial emissions. The participants answered a variety of health questions while their lung function was monitored over a course of four years. Factors such as their age, gender, body mass index, education, income, smoking status, and secondhand smoke exposure were also considered in the research.

The researchers discovered that participants experienced two years of aging in their lungs when exposed to air pollutants in their homes. However, those who lived in areas with higher concentrations of particulate matter were four times more likely to develop COPD than those who were simply exposed to secondhand smoke and twice as likely to have the disease than individuals who were smokers at any point.

Furthermore, research showed that individuals who come from lower-income households are at a higher COPD risk. The study authors determined that they needed more research to find the direct relationship between air pollution and COPD in more vulnerable populations. They have also begun to further investigate whether any genetic factors are also involved.