You are here: Home / Healthy Aging / How Vaping Expedites the Skin’s Aging Process

A recently popular alternative to cigarette smoking is that of vaping. Studies show that vaping could accelerate the skin’s aging process.

Created as an alternative to cigarette-smoking, vaping, or inhaling from a product known as an e-cigarette, occurs when a person ingests the vapor that the item produces. Available for public consumption in the United States since 2007, vapers use e-cigarettes by attaching a battery to the apparatus, which heats the liquid until the user can inhale the vaporized product.

Vaping has been promoted by some as a potentially less harmful activity than cigarette-smoking because vaping does not involve the use of tobacco. However, vaping liquid contains other substances that, certain members of the medical community opine can potentially precipitate harmful effects.

Connection Between Vaping and the Skin

Physicians opine that the use of e-cigarettes can stimulate the aging process in the skin of vapers for several reasons including the following:

Healthcare professionals suggest that individuals who inhale and exhale any type of chemicals are repeatedly interrupting the normal flow of oxygen-rich blood. This can precipitate circulation problems that inhibit the skin from receiving optimal blood and oxygen supplies. Additionally, oxygen depravity can reduce systemic concentrations of elastin and collagen, two substances vital to skin health.

Any form of smoking, regardless if the inhaled substance is tobacco, also possesses the capacity to diminish bodily amounts of vitamin C. This nutrient is paramount to the production of collagen, which helps maintain the strength and vitality of skin cells.

Free radicals are harmful systemic particles that stimulate bodily concentrations of inflammation. Chronic inflammation could precipitate the development of many illnesses and exacerbate skin problems that threaten the aesthetic appearance of those affected. 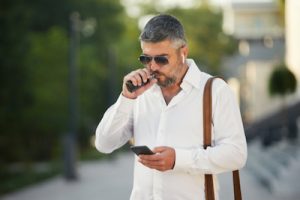 Those who routinely “vape” stand at greater risk of developing the preceding skin-related issues. Should these problems become pronounced, affected persons could experience aesthetically-unpleasing skin maladies including wrinkles, sagging and age spots. As a general rule, the appearance of a person’s skin might make him or her look significantly older than he or she is.

Can Vaping’s Impact Be Reversed?

Fortunately, individuals who have experienced vaping-related skin maladies might be able to stem the tide or potentially reverse its effect by doing the following:

The most important skin-preserving action one can take is to stop vaping immediately. When a person ceases this detrimental activity, he or she will no longer be subject to the potentially adverse effects of doing so.

Extreme weather conditions can exert a deleterious effect on the skin. Individuals who spend significant amounts of time outside during the summer months are advised to apply suntan lotion with a sun protection factor of 30 or higher. Additionally, skin should be covered and kept warm during wintertime.

Cleansers containing potentially caustic substances should be avoided. These products could elicit irritation and burning.

Healthcare professionals and nutritionists opine that the consumption of a diet rife with produce could decelerate skin aging because these products contain many vital nutrients. On the other hand, the professionals recommend avoiding foods that could potentially be detrimental to optimal skin health such as those containing elevated fat and sugar contents.

Exercise is believed to increase blood circulation within the skin, which might stimulate systemic production of collagen and elastin.