More than 44 million people worldwide have either Alzheimer’s or a related form of dementia. Also, Alzheimer’s and other neurodegenerative diseases are most common in Western Europe, with North America not trailing too far behind.

As it stands, the global costs associated with treating Alzheimer’s and other neurodegenerative diseases is in the neighborhood of $605 billion and is expected to exceed $1.1 trillion by the year 2050. Fortunately, there is reportedly a blood test on the horizon that researchers and scientists believe will enable physicians to detect these diseases sooner, which, in turn, may cut down on treatment costs while also improving the lives of patients diagnosed with these diseases.

Can You Have Alzheimer’s Disease and Not Know It?

Alzheimer’s is a byproduct of dementia and accounts for 60 to 80 percent of all dementia cases, according to the Alzheimer’s Association. The disease is known to cause memory loss, and it is also a progressive disease. Therefore, the signs and symptoms of the disease are not always immediately apparent. In most cases, it can take several years before Alzheimer’s disease advances to the point where it interferes with your day to day life.

Some of the early symptoms of the disease include the following:

While these symptoms are usually enough for most people to seek medical treatment, others will not be seen by a physician until after they have experienced significant cognitive decline. And even then, it is often at the behest of friends and family.

How Is Alzheimer’s Disease Currently Diagnosed? 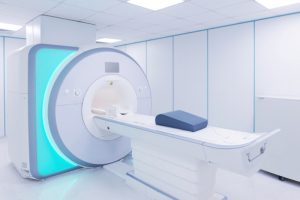 Currently, diagnosing Alzheimer’s, dementia, and other neurodegenerative diseases entails patients’ undergoing a CT (computed tomography) or an MRI (magnetic resonance imaging) brain scan to determine if an individual’s memory loss is correlated with these diseases. After all, other health problems like tumors, strokes, and hydrocephalus, which is a condition that causes a buildup of cerebrospinal fluid in the brain, can all mimic neurodegenerative diseases.

During a brain scan, physicians will be looking for signs of loss in brain mass, which is often the hallmark of Alzheimer’s disease, dementia, and other neurodegenerative diseases. It is also not uncommon for specific regions of the brain, like the hippocampus, for example, to become atrophied in those who have developed any of the mind-robbing diseases.

Research is being conducted on a blood test that can measure beta-amyloid protein in the blood, which may offer better insights into the health of a patient’s brain and may also identify Alzheimer’s and other neurodegenerative diseases sooner, not to mention more accurately, than brain scans.

In Alzheimer’s, the degradation of the amyloid precursor protein changes. This results in so-called beta-amyloid proteins, which accumulate as toxic oligomers. These molecules in turn agglomerate and form the indissoluble deposits between the nerve cells, also known as ß-amyloid plaques, or Alzheimer’s plaque, which cannot be removed by the body and destroy the brain.

When Will Blood Tests for Alzheimer’s Be Available?

Although most of us will welcome blood tests that can identify neurodegenerative diseases sooner rather than later, these tests will not be available for clinical use for several years. However, early research shows that these types of tests will streamline the process involved in diagnosing the disease, which, in turn, will allow patients to be started on a treatment that much sooner.

Tests that have been conducted on laboratory mice show that mice that had amyloid deposits in their brain, which were revealed in blood tests, were twice as likely to develop a neurodegenerative disease compared to those that did not have amyloid deposits. Researchers and scientists are hopeful that these testing results conducted on mice can be replicated in human subjects once clinical trials finally get underway.

Although many individuals will experience some of the early signs of Alzheimer’s and other neurodegenerative diseases, some will not, according to many physicians, researchers, and scientists. There are some individuals who will remain symptomless until the disease has significantly impacted the brain. As a result, there is a collective push from the science and healthcare communities to get these clinical trials underway as soon as possible, especially since current diagnostic protocols are not always the most accurate.