You are here: Home / Healthy Aging / Understanding the Link between Aging and Pulmonary Fibrosis

A potentially serious medical condition known as pulmonary fibrosis may be adversely impacted by the aging process. Luckily, there are a number of treatment and prevention methods.

This ailment causes tissue in the lungs to thicken and stiffen. If not treated, this process could lead to damage and eventual scarring that threatens the function of the lung and the entire respiratory system.

Pulmonary fibrosis may be precipitated by a host of biological, environmental and lifestyle factors. Common biological factors include diseases, infections and various autoimmune disorders that impact either lung function or structure. In some cases, environmental factors like chronic exposure to airborne toxins or pollutants might increase one’s risk. Lifestyle choices such as smoking or any other vice that has the potential to compromise lung function could exacerbate the onset of the disease.

One less common factor is the usage of specific medications. Radiation treatments, such as those utilized to treat lung cancer, could lead to pulmonary fibrosis. That said, in certain instances, there may be no known or discernible cause for the ailment’s existence. Cases that have no apparent origin are medically referred to as idiopathic pulmonary fibrosis.

The symptoms patients experience may vary depending upon the underlying cause as well as the severity of the disease. Common symptoms include shortness of breath, coughing, tiredness, diminished appetite, unintended weight loss, chest discomfort, exercise intolerance and generalized body aches and malaise.

Connection between Age and Pulmonary Fibrosis 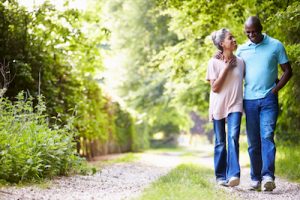 Many health professionals specializing in lung function believe that age is the most significant risk factor when predicting the onset of pulmonary fibrosis. This is because older people are more susceptible to:

The specific treatments chosen by the physicians of afflicted patients will depend upon factors such as the patient’s age, general health, the specific underlying cause and the condition’s severity. Common treatments include:

In cases where the precipitating factors were genetic ailments or idiopathic in nature, prevention can be difficult. That said, simple lifestyle or environmental changes could significantly decrease one’s chances of developing this illness. Those who exercise, avoid detrimental vices like cigarette smoking, and do not work or live in or near potentially toxic environments could greatly decrease their chances of developing pulmonary fibrosis.